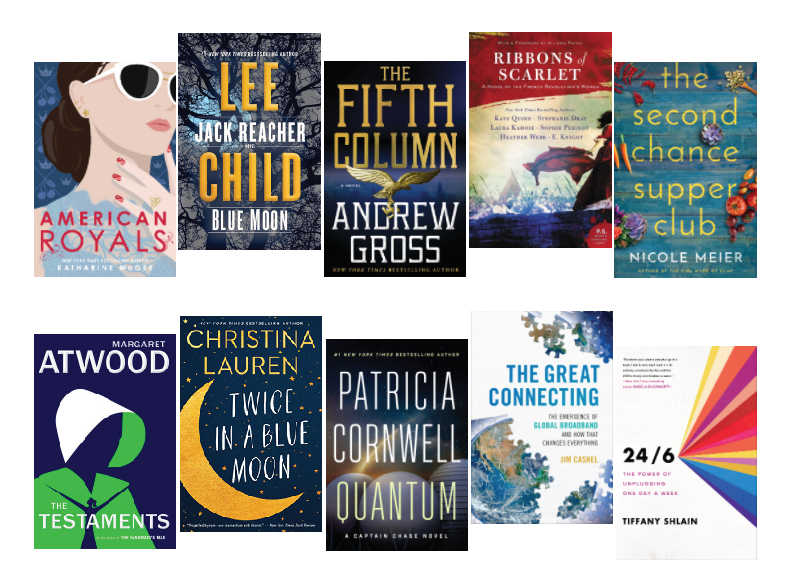 Hello Fall! Whether you’re looking to Fall Back in Time with Historical Fiction, Fall In Love with Romance Reads, Fall For Thrillers or Factual Fall Reads, we have you covered.

Fall Fiction
American Royals by Katharine McGee: If you can’t get enough of Harry and Meghan or Kate and William, meet American princesses Beatrice and Samantha. Royally fun! In Blue Moon by Lee Child, everyone’s favorite character, Jack Reacher, comes to the aid of an elderly couple and confronts his most dangerous opponents yet.  The Fifth Column by Andrew Gross is an unputdownable historical thriller. As the threat of World War II grows and fears of a “fifth column”—German spies embedded into everyday life—are everywhere, are the neighbors a part of a sinister conspiracy?  Ribbons of Scarlet is a collaboration of six great authors where they bring to life an epic novel of women in the French Revolution.  The Second Chance Supper Club by Nicole Meier is a page turner in which two estranged sisters reunite in an emotional novel of family, forgiveness, lost hope, and new beginnings.  For all fans of The Handmaid’s Tale on Hulu, Margaret Atwood has written a sequel, The Testaments coming out on 9/10!  Twice in A Blue Moon by Christina Lauren is a wonderful modern love story about what happens when your first love reenters your life when you least expect. Quantum is the first in a new series by Patricia Cornwell, featuring a brilliant and unusual new heroine, cutting-edge cybertechnology, and stakes that are astronomically high.

Falling into the (Non-Fiction) Future
The Great Connecting by Jim Cashel details globalization as the remaining half of the world’s population gets internet access.

24/6: The Power Of Unplugging One Day A Week by Tiffany Shlain is the book to pick up as you put down that phone!

DART TO THE STATE FAIR OF TEXAS