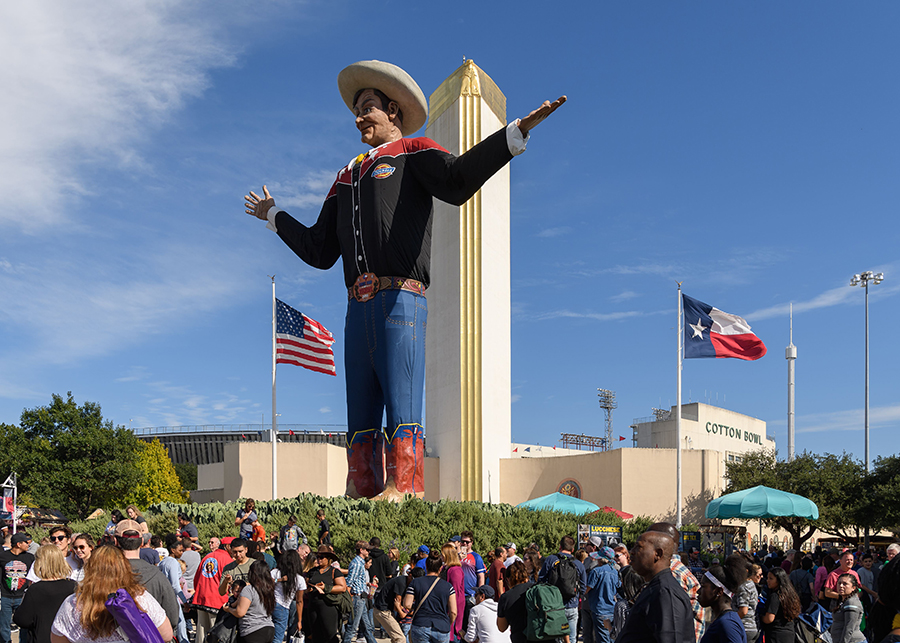 Big Tex, official greeter and icon of the State Fair of Texas, is known around the globe as the world’s tallest cowboy. The gentle giant has welcomed millions of guests to the annual exposition in Fair Park, but many don’t know his history—who he used to be and how he wound up in Dallas.

NOT HIS FIRST RODEO
It’s no surprise most people know Big Tex as the State Fair of Texas’ host-with-the-most – after all, he’s had the job for 65 years – but before coming to Big D in 1952, Tex played the roll of another well-known character in a small Texas town due east of Corsicana.

In the free-wheeling years after World War II, merchants in Kerens, Texas, had a problem. Residents of the tiny town drove to nearby Corsicana (or even made the 75 mile journey to Dallas) for their annual Christmas shopping sprees. Looking for a gimmick that might encourage people to spend money at local stores, the wise folks at the Kerens Chamber of Commerce built what they claimed was the world’s largest Santa Claus, a 49-ft. tall figure made of iron-pipe drill casing, papier mache, cloth (outfit), and seven-foot lengths of unraveled rope (for the beard, of course).

Unsurprisingly, the unique promotion was a success during the ’49 holiday season, but just as fads and viral videos fade today, the novelty of Kerens’ Santa faded the following year and community support waned. Ah, but as the saying goes, “one small town’s giant Santa is another city’s big Texan.”

SANTA CLAUS BIG TEX COMES TO TOWN
In 1951, Fair officials settled on the rhythmic tagline, “She’ll be a son-of-a-gun in ’51,” to help promote the then 16-day exposition in promotional and advertising materials. Accompanying the line was a broad-chested, red-checked-shirt-wearing cowboy named “Tex.”

“Big “Tex,” in his red-checked shirt, cowboy hat and boots, will be used on billboards, posters and State Fair of Texas literature to point out the fact that the 1951 exposition will be the biggest and best yet.

Fair officials decided “Tex” was the most appropriate symbol to adopt, since the State Fair of Texas is one of the things Texans would be most justified in bragging about – if they ever did that sort of thing.”

The ads and the Big Tex character worked. So in late 1951, at what are presumed to be negotiations at the highest level, Fair officials purchased the Kerens Santa Clause for $750 (about $7,100 in 2016). Santa was headed to Big D.

A LITTLE WORK, TEX’S DEBUT, A NOSE JOB AND A MOVE
After making the trek to Dallas, the figure formally known as Santa was renamed Big Tex. Before Tex took his job at the 1952 State Fair of Texas, the Fair hired Dallas artist Jack Bridges to alter the mixed media statue into a more cowboy-like appearance. Bridges gave a wink to the right eye, slimmed the face and torso, and moved the right arm to the right breast of the structure to give a thumb-in-vest appearance.

Big Tex made his public debut at the opening of the 1952 State Fair. Wearing size 70 boots and a 75-gallon hat, Tex towered 52 ft. above revelers around his feet in the median of the Court of Honor.

Various comments were made during the ’52 Fair regarding Tex’s look, so the gentle giant went under the scalpel in the off-season to straighten his nose, open his right eye, and was even given a voice.

During the mid-1950s, Tex moved to a new home at the roundabout in front of the Federal Building (now known as the Tower Building). Big Tex still stands on that very spot to this day.

MOVIE STAR, SESQUICENTENNIAL CELEB. SENIOR. OH, AND THE FIRE.
Big Tex has seen a lot in his 65 years of service, but some events stick out.

Co-starring with the likes of Pat Boone, Bobby Darin and Pamela Tiffin, Tex made his silver screen debut in the 1962 remake of “State Fair.” The film was shot in Fair Park one month before the 1961 Fair and included a celebrity swine appearance by an 800-lb. California hog playing the role of “Blue Boy.”

In 1986, the State Fair of Texas was one of many events held in the State to celebrate 150 years of Texas’ existence. Big Tex welcomed 3,959,058 visitors to Fair Park during the exposition, the largest attendance ever for an American state fair and the longest fair in American history. On the final day of the ’86 show, the State Fair of Texas celebrated its 100th birthday (f.y.i. our birthday is October 26, 1886.)

Many Baby Boomers acknowledge their 50th birthdays, and Tex’s was no exception. A festive party was thrown in 2002, complete with a giant birthday cake and an AARP card.

Things were a bit hotter ten years later as Tex was celebrating his 60th birthday. On the last Friday of the Fair, October 19, 2012, a fire due to an electrical short started in the base of the beloved icon. Dallas Fire Rescue rushed to the scene, but it was too late, the structure was destroyed.

But, like any tall, proud Texan would do, Big Tex showed up for work in 2013 – and was even early.

After one full year of planning, development, multiple trips back to the drawing board (as the owner of Texas-based SRO Associates Eddy Snell would say, “There’s just not a manual on how to build a 55-foot cowboy.”), construction and grand unveiling plans, high winds forced Fair officials to drop the curtain on Big Tex one day early.

Big Tex returned to the State Fair in grand fashion with a Texas-sized welcome back celebration held on September 27, 2013. As he had done for many years, Tex breathed in a breath of fresh Texas air and said, “Howdy, Folks!,” to the world.

Who makes clothes for Big Tex?
He’s a practical guy who prefers solid workmanship and comfort offered by Fort Worth’s own Williamson-Dickie Mfg. Co. His outfit is sewn in the original Dickies plant that opened in 1922 at 509 West Vickery in Fort Worth.

It takes a team of Dickies sewing experts two weeks to make the shirt. It has to be durable enough to withstand a month out in the elements, so Dickies makes it out of awning material with venting slits in the material so the wind can blow through it.

What about his pants?
Big Tex’s jeans size are 434 x 240 (waist x inseam). It takes 100 yds. of fabric to make them; they weigh 100 lbs. and have 3.5-in. rivets. It takes a week to make the cowboy’s jeans, which are replicas of Dickies popular 5-pocket jeans made from Dickies denim provided by Mount Vernon Mills in Trion, GA.

BIG TEX: THEN AND NOW 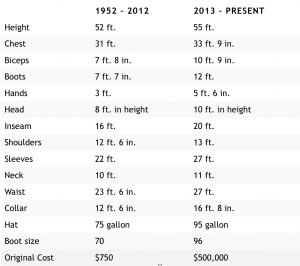