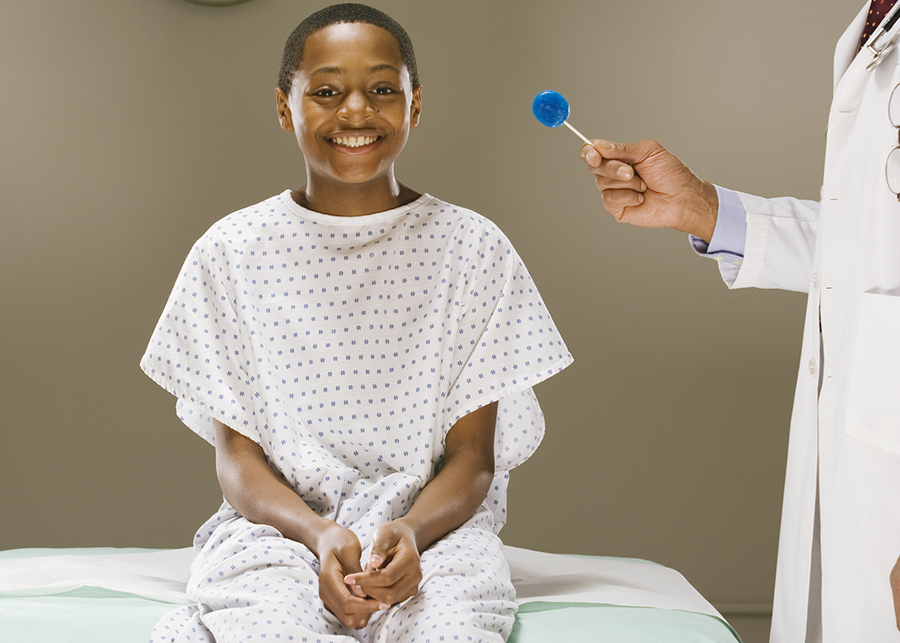 There comes a time in every young man’s life when he walks into his doctor’s office and looks around the waiting room…hears inconsolable babies and sees snotty preschoolers…takes a seat on the brightly colored giraffe table…waits for his pediatrician…and asks himself, “What the heck am I doing here?”

This isn’t the exact experience of every young man, but it is for many of the young men I care for, and it was mine when I was a 12-year-old boy still seeing my pediatrician.

For me, I didn’t really believe that the office I was in was made FOR ME. Geez, I was nearly a teenager! I didn’t need a lollipop or a cute sticker. I didn’t need my mom to hold my hand during my shots. My voice was deeper, except when it wasn’t. I was growing hair in new places.

What many parents don’t realize is that in a three-year training program, pediatric trainees these days are only asked to do ONE month of adolescent medicine, the specialty that I practice. One month out of 36. It’s not that they might not see other teenagers during training, it’s that one month of that three-year training might not be enough time to truly learn the intricacies of taking care of the adolescent patient.

What I want you, the reader, to understand is that adolescent males DESERVE special care. They’ve got similar, yet different, issues to their female counterparts. And for a long time, young men simply haven’t accessed healthcare, not because they didn’t have health problems, but for other reasons—access to care (insurance), false machismo (“boys don’t cry”), dissatisfaction with the office experience, or even gender dynamics. (Pediatrics has a higher proportion of female doctors than any other specialty in medicine—57% of the workforce are women.) How many boys want to ask their female pediatrician about sexual development? Adolescents, specifically males, need specialized care. Having a doctor who understands and can help a young man navigate through stages of development is critical to his transition to adulthood.

TWEEN EARLY ADOLESCENCE (AGES 10 to 13)
Jack, at age 12, sounds a lot like I did at the same age. He is slowly realizing that his parents aren’t “perfect,” and that lost idealization is leading to slightly more confrontation with his parents, less acceptance of parental criticism, and more parental separation. “He’s moody all the time,” his mom says. “She’s the moody one,” he snaps back, using his words more readily (and rudely).

He’s self-conscious now too, his cracking voice and (slowly) changing body causing him more stress. “When am I gonna get taller?” he asks at the beginning of every visit to see me. He’s obsessed with his height. Other boys seem bigger and faster. Some of those boys are his close friends. He doesn’t want to hear that they have different parents with different genes. He wants to play professional basketball. He’s currently 4’10”.

We discuss high-risk behavior and end the appointment on a high note. I tell him that, based on his sexual maturation rating, that he’s going to have a growth spurt in the summer. He’s psyched!

TEEN MIDDLE ADOLESCENCE (14 to 16)
I see Jack for his 15-year-old physical. He grew like I promised. Now he’s 5 foot 6 inches. His mother comes into the room, and before she’s uttered five words Jack interrupts, “Isn’t Dr. B my doctor, not yours?” He asks her to leave shortly after that and she obliges. As I review some preventative health information, I notice him posting a message on Snapchat: a picture of him sitting in his doctor’s office, looking bored. He sees my face and puts his phone away. We talk about his girlfriend. He’s honest with me that they’ve talked about sex but are planning on waiting for a while. We spend a lot more time talking about risky behaviors than we have in the past. It’s a good conversation. He talks as if he’s invincible. I share with him my experiences of taking care of young men his age who have believed the same thing.

Before he leaves, I talk to him about the way he treated his mom and the way he treats his girlfriend, and women in general. He’s able to understand that his mom loves him and is probably hurt by his words and actions. We talk about mutual respect, the same kind of respect I show him, that he shows his girlfriend. I praise him for his success on the JV basketball team and his creative writing. He’s spending less time playing video games (whether it’s due to the girlfriend, sports, or his creative pursuits). It’s a good visit.

YOUNG ADULT LATE ADOLESCENCE (17 to 21)
Jack returns the summer after his sophomore year at Texas Tech. He’s a different kid from the one I took care of at age 12. He’s a young man. His mom’s not here today. He’s been coming by himself for a few years now. Jack tells me his parents are well and that he’s meeting his mom for lunch after our appointment. We laugh a little about how far he’s come in that relationship. “We had our hiccups, but she’s a great mom.” He’s enjoying college. He’s found some success in engineering and he’s committed. He’s lined up a nice internship for the summer and will spend his free time working out—he’s gained some unwanted weight, and his cholesterol is a little higher than last year—and reconnecting with old high school friends. His grades were better first semester, and being social chair of his frat was great for leadership but bad for his grades. He acknowledges he drank more than he should have a couple of times, but he’s not vaping or smoking weed. He broke up with his serious girlfriend during his second semester freshman year and has had only one sexual encounter since then (protected). I give him some relationship advice, recommend a therapist in our office for his mild generalized anxiety, and encourage him to look into a study abroad program next semester. He asks me how long I can be his doctor. I answer, “Until you stop being a young adult. Maybe 26?”

My work at Young Men’s Health and Wellness is truly a privilege. Taking care of young men like “Jack” is a joy. Caring for them through these developmental stages, keeping them physically whole, mentally and emotionally strong yet sensitive—this is why I went into Adolescent Medicine. I wish there were many more Adolescent Medicine specialists like myself out there, but thankfully there are other male pediatricians who feel and practice the way I do (thank goodness for my co-worker, Dr. Kevin Windisch!). We need more though.

Because our young men need us.