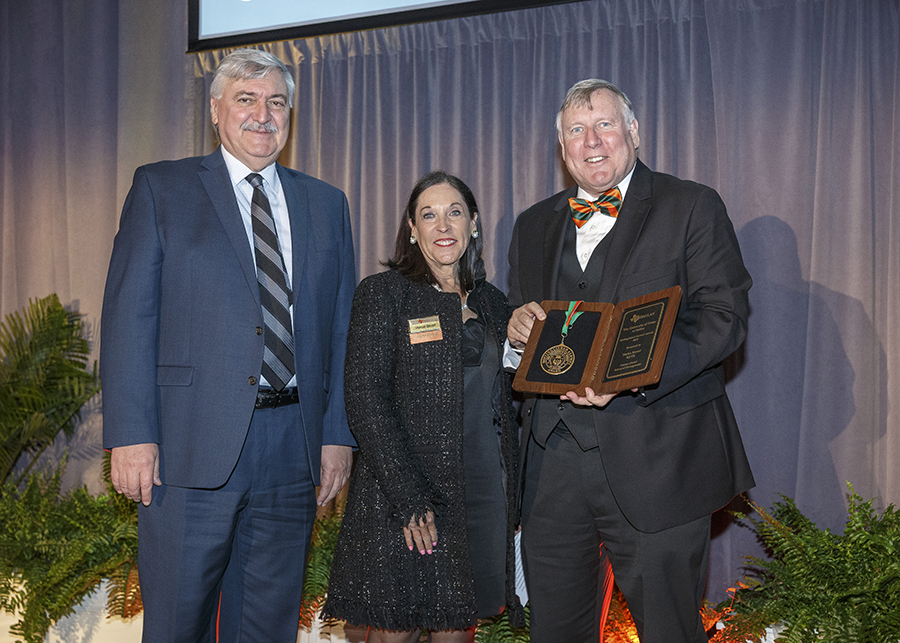 Longtime civic leader Venise Stuart received a Distinguished Alumni Award from The University of Texas at Dallas’ gala dinner held in honor of all award recipients at UTD’s Davidson-Gundy Alumni Center. Nearly 300 alumni and friends attended the sold-out gala, which was presented by Axxess. The City of Richardson was also a sponsor. Mike Brodie, Executive Board chair, presented Stuart with the award.

“When I graduated from UTD with a Bachelor of Science in Business and Public Administration in 1979, I had no idea where I was going or what I’d be doing,” Venise said. “Being such a new school, with small classes, maybe 1,200 students – having only two buildings – with classes mostly held in the evening, I was able to serve as Vice President of Student Government, and after taking leadership/training courses, I even helped enroll new incoming students to the upper division classes being offered then. Being a new and at that time, a small university, students were able to help in a lot of various ways.

She continued, “Communications was important when I began doing volunteer work, from the day my sisters and I began knocking on doors selling Girl Scout cookies, to fundraising for the Junior League of Dallas, serving as a board member for the Dallas Symphony Orchestra League, incoming president of the Women’s Council of the Dallas Arboretum & Botanical Garden, leading the AWARE Dallas Board as president for two years and in various other roles for nonprofits in Dallas and Toronto – communications was and still is the key.

Chairing her first charity ball in the 1980s, Venise has since dedicated her efforts and energy to a number of worthy causes and organizations, including the University’s Center for Vital Longevity and the Center for BrainHealth

Venise thanked her family and many friends for their continued support, who also believe in the importance of giving back to the community.

“Giving back to the community is something I feel passionate about,” she said. “It is how I’ve become known as a civic leader, which surprises me because I didn’t try to become a civic leader, it was natural for me. I love to inspire people – to bring out their best. I love to guide people to the right conclusion and not be afraid to grow and think outside the box, to come to a conclusion that is best for all. I am enthusiastic and passionate about what I do. I want to do well and at the same time, inspire the people who support what I’m doing.

Crediting UT Dallas for helping her in many ways to achieve her personal goals in communications, to develop a hard work ethic, to create time management skills and the ability to help others achieve their goals, she thanked her many mentors along the way saying, “UT Dallas was definitely one of the most important influencers in my life.”