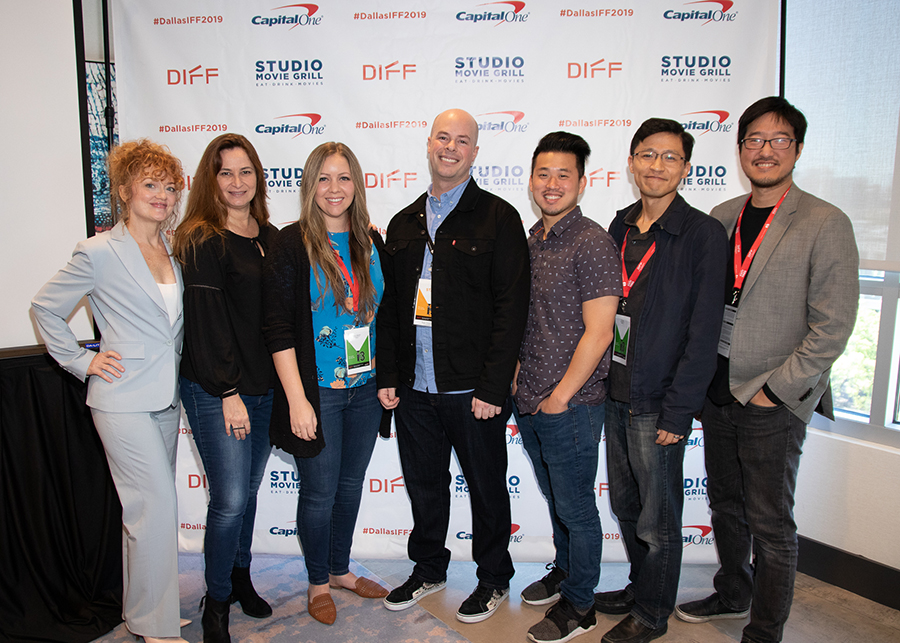 Dallas Film is pleased to announce the winners of the 13th annual Dallas International Film Festival.

“We are proud to present the award recipients of this year’s Dallas International Film Festival,” said Johnathan Brownlee, CEO & president of Dallas Film and executive director of Dallas International Film Festival. “Film is a labor of love, a medium for sharing our ideas, passions, interests and stories. We thank everyone who submitted their work to Dallas IFF. Putting your film out for the world to see is like opening a piece of your mind and heart for the world to experience. We applaud you for contributing to the film industry because films have the power to change our lives outside the theater in tangible ways.”

Dallas Film’s artistic director James Faust added, “We are extremely grateful to all of the individuals who participated as jury members and spent hours deliberating the recipients of the awards for the 2019 Dallas International Film Festival. With more than 150 films screened, we know that it was not an easy task of choosing the winners for each category. We are appreciative of your time and dedication to serving the filmmakers who participated in this year’s festival.”

Dallas Film (www.DallasIFF.org), established as Dallas Film Society in 2006, is a 501(c)(3) nonprofit organization that exists to celebrate the past, present and future of film in our community. The organization provides leadership in screen education and the recognition and celebration of excellence in the art of film, television, and digital media. Through a variety of screenings, educational programs, and festivals, Dallas Film raises awareness of the world’s most approachable and inclusive art form.

Shoot the Moon Right Between the Eyes, Graham Carter

J.R. “Bob” Dobbs and the Church of the SubGenius

Dallas County Historical Society Jury
The Dallas Historical Society is a nonprofit organization dedicated to the preservation of Dallas and Texas history. Offering education programming, lectures, historic city tours, museum exhibitions and other special events, this organization strives to be the preeminent resource for exploring and instilling appreciation for the diverse history of Dallas and Texas. We endeavor to encourage historical inquiry and maintain the importance and relevance of history today. Our collection of archival material – including historic photographs, diaries, journals, papers, periodicals, maps, and books – is available to researchers. Formed in 1922, the Dallas Historical Society is the oldest organization in Dallas County committed to preserving the history of the region and presenting it to the public in innovative and informative ways.

Tom Oyer
Tom Oyer is associate director, Member Relations and Awards at the Academy of Motion Picture Arts & Sciences, where he oversees all aspects of the Documentary and Short Film categories, including rules, eligibility submission and voting. Oyer is in his eleventh year at the Academy.

Laura Moss
Laura is a director and production designer from New York City. Her work has screened at MoMA, Tribeca, SXSW, Sundance, Telluride, Berlin and Cannes. She was named one of Filmmaker Magazine’s 25 New Faces of Independent Film, an IFP Emerging Storyteller and has earned jury awards for her films at Tribeca, SXSW, Melbourne International Film Festival and Hollyshorts. Laura is an alumna of NYU’s graduate film program. Her first feature will be produced by Fangoria Films in 2019.

Nick McCarthy
Nick McCarthy is the Director of Programming & Operations at NewFest, New York’s LGBTQ Film & Media Arts Organization. Nick curates and manages the annual New York LGBTQ Film Festival – which celebrated its 30th anniversary in October 2018 – in addition to NewFest’s year-round programming, including the community-driven monthly series NewFest at The Center Presents and the retrospective series Coming out Again at Quad Cinema. Prior to NewFest, Nick served as the Film Curator at The Tank, and worked in academic publishing and international media. Nick has written about film and media for publications including Slant Magazine, Time Out New York, NBC News, and the Boston Phoenix.

David Blue Garcia
David is an Emmy award-winning Director / DP working in commercials, documentaries and narrative films and based in Austin, Texas. He has lensed 6 independent feature films as a cinematographer including his feature length directorial debut, TEJANO. At its world premiere, TEJANO won the Audience Award at the 2018 Dallas International Film Festival.

Milan Chakraborty
Milan Chakraborty is a 15-year veteran of the film industry after a career as an auditor/Certified Public Accountant. He started his career at Warner Bros. (“WB”) and New Line Cinema (“NLC”), where he performed detailed reviews of 10 feature film productions with budgets ranging from $5 – $200 million. Productions include: WB: BATMAN BEGINS – London; DUKES OF HAZZARD – Baton Rouge!; V FOR VENDETTA – Berlin and NLC: HISTORY OF VIOLENCE – Toronto. In 2008, Milan left the big studios to focus on independent films, and has since produced 13 features including the 2014 film WHERE HOPE GROWS, which won the HEARTLAND AUDIENCE AWARD in 2014 and world premiered at DIFF, 2013 Sundance competition film THE LIFEGUARD starring Kristen Bell directed by Liz Garcia and MY FRIEND DAHMER directed by Marc Meyers, released in November 2017 and “certified fresh” by ROTTEN TOMATOES. He was recently an Executive Producer for the Sam Levinson directed film, ASSASSINATION NATION, which premiered at the 2018 Sundance Film Festival and sold to NEON and AGBO. Milan has world premiered 2 films at DIFF, WHERE HOPE GROWS and ROCK SLYDE, his first film, in 2009 – both written/directed by CHRIS DOWLING of Richardson.

Jim Brunzell
Jim Brunzell III was born in the 70’s, played sports in the 80’s, went to school in the 90’s, and started working on film festivals in the 2000’s. He is the Artistic Director for the All Genders, Lifestyles, and Identities Film Festival (aGLIFF) in Austin, TX and the 32nd annual festival will take place August 22-25, 2019. He was named a “Top 10 Local Queer Hero” by the Austin Chronicle in 2016 saying, “It says a lot when an ally makes the list, but as Artistic Director of aGLIFF, Brunzell has done a bang-up job curating the film festival and screenings for the entire LGBTQ spectrum.” He is also the Festival Director for the music/film/art festival Sound Unseen in the Minneapolis, MN, which was just named “One of the 25 Coolest Film Festivals in the World for 2016” by Moviemaker Magazine and will be celebrating its 20th annual festival, November 13-17, 2019. He has served on numerous film festival juries and is also a big sports nerd.

Meredith Shea
Meredith Shea is an Associate Director of Member Relations and Awards at the Academy of Motion Picture Arts and Sciences in Los Angeles. She oversees the Animated Feature and Foreign Language film Oscar categories, along with the Directors, Film Editors and Writers branches. She has participated on panels at Marché du Film at the Cannes Film Festival, BFI London Film Festival, Flanders CONNeXT at Film Fest Gent and served on juries for the Cleveland International Film Festival and Milwaukee Film Festival. Miss Shea began her career in the arts at Everett Collection, the Manhattan film archive and photo agency. She is a graduate of St. John’s University in New York City.

Bart Weiss
Bart Weiss is an award-winning filmmaker, educator and director/founder of the Dallas VideoFest, which produces, DocuFest, Alternative Fictions, the Ernie Kovacs award, the 24 hour video race and the North Texas Universities Film Festival. He is the artistic director of 3 stars Jewish Cinema. He produces the TV show “Frame of Mind” on KERA TV. He is an associate professor at the University of Texas at Arlington where he teaches film and video. He was President and Chair of AIVF and was a video columnist for The Dallas Morning News, and United Features Syndicate. He currently writes for Student Filmmaker Magazine and TheaterJones.com. Bart received an MFA in Film Directing from Columbia University.

Christine Davila
Before her role as Creative Executive at Stage 13 where she found and developed short form digital episodic series, she spent over ten years screening hundreds of independent films, focusing on Spanish language and U.S. Latino as a freelance programming associate for film festivals like Sundance, Los Angeles Film Festival, San Antonio’s CineFestival, Morelia Film Festival and the Curacao International Film Festival Rotterdam. Her goal is to promote awareness to diverse and compelling stories that cross genres and borders. She also wants to define the conversation of what “Latino” means.

Josephine Decker
Part of Time Warner’s 150 incubator, Sundance’s New Frontier Lab and one of Filmmaker Magazine’s 25 New Faces of Independent Film, Josephine Decker has been said to be ushering in a “new grammar of narrative” by The New Yorker, Her newest feature Madeline’s Madeline World Premiered at Sundance 2018 where it was called a “mind-scrambling masterpiece” by Indiewire and a “radical, breathtaking beauty” by The Village Voice. The film was recently nominated for Best Picture and lead Helena Howard for Breakthrough Actor at IFP’s Gotham Awards and received two Independent Spirit Award nominations as well.  Josephine premiered her first two narrative features at the Berlinale Forum 2014 to similarly rave reviews.  Josephine is currently in post-production on her fourth narrative feature starring Elisabeth Moss about the writer Shirley Jackson and just directed an episode of HBO’s Room 104.  Her documentary, film and music video work has shown at the Museum of the City of New York, on Netflix, PBS and MTV and at hundreds of film festivals around the world.

Casey Baron
Born and raised in the small island of Dominica located in the West Indies, Casey Baron moved to Austin after graduating from Florida State University with a degree in English – Editing, Writing, and Media. While attending FSU, Casey worked for The Torchlight Program. During his time there, he was the Team Leader and Personal Assistant to film industry veteran Paul Cohen, the program’s Executive Director. Beyond that creative venture, Casey has also been an editor on a handful of literary magazines, including FSU’s The Kudzu Review and Miami Dade College’s AXIS Creative Arts Magazine. Casey has been a part of the Austin Film Festival family for three years running; starting off as an intern before climbing the ladder to become the festival’s Shorts Programmer for its 25th anniversary. He’s excited to jump into his new role as the Senior Film Program Director, and continuing the organizational and personal mission of championing storytellers. When he’s not racing to find interesting stories, Casey spends his spare time watching basketball and soccer, listening to music, and playing with his dog Niobe.