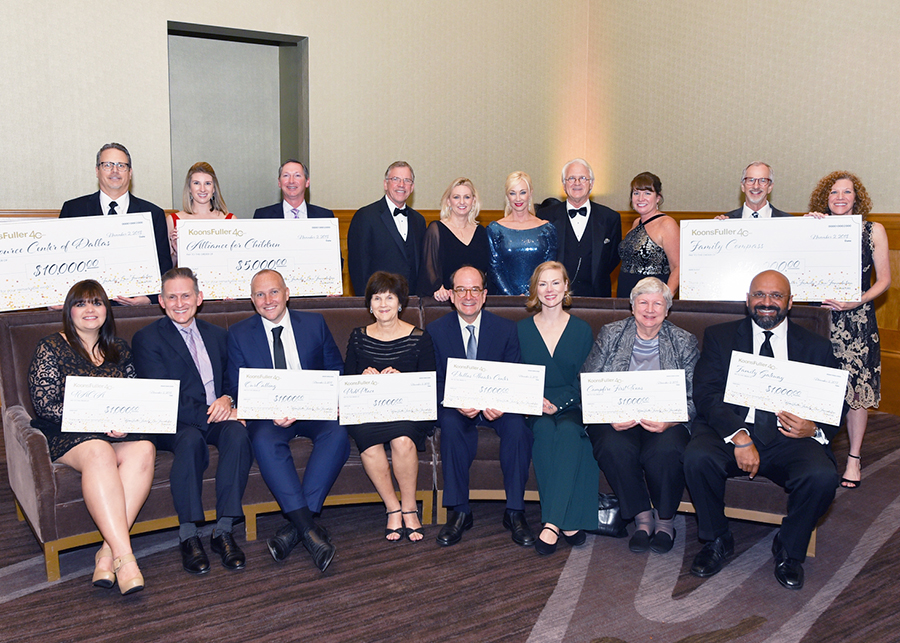 Being in business for 40 years is no easy accomplishment. For the KoonsFuller law firm, determining how to celebrate their longevity was clear as day.

KoonsFuller established the KoonsFuller Family Law Foundation, which granted a total of $200,000 to some of the charitable organizations with which they’ve worked during their nearly half-century of existence.

“What better way after 40 years of success than to share that success with the people who work so hard?” says Ike Vanden Eykel, CEO and Managing Shareholder in the firm’s Dallas office.

The firm operates five full-service locations including Dallas, Houston, Denton, Plano and Southlake. The scope of the foundation is about giving back to the community in which each attorney practices.

“The charities are local, and that’s a unique thing about such a large law firm,” notes Sherri Evans, Managing Shareholder in the Houston office. “It’s important for us to remember that each of our offices is part of a community. It makes it more personal.”

Firm leaders began to brainstorm about how to mark the firm’s 40th anniversary, and the decision to establish a charitable foundation was unanimous. “The concept of giving back to the community emerged, and we decided to form a foundation to benefit charities all over Texas,” says Evans.

The selection process began with an invitation to charitable organizations that focus on family-related issues to make a grant request. The response was overwhelming. In addition to designating the amount of money they were requesting, grant applicants were required to provide detailed information such

as their mission statement, members of their board, normal sources of funding, who they service and how the grant money would be directed.

“This helped us understand their needs and where the money would be directed,” explains Vanden Eykel. “All of this data made our job easier.”

At the same time, Vanden Eykel and Evans each put together a panel of judges to select the winners. The Dallas panel consisted of Robert Jordan, Ambassador to Saudi Arabia under President George W. Bush, Cathy Maher, former Executive Director of the Dallas Bar Association and Marcos Ronquillo, community activist in Dallas.

“I was elated as to how seriously the judges executed their task. As a firm, we were deciding on $200,000 of grants, which is a great deal of money for these organizations,” Vanden Eykel says. “We had a final meeting to discuss, and I was floored and gratified to see how well thought out this grant distribution process was.”

The Houston panel featured Jeff Bagwell, former first baseman and coach of the Houston Astros, Judge David Farr of the Houston family court, who after Hurricane Harvey, got the family court system up and running again, and Chita Kraft, newscaster for CBS Channel 11, as well as Evans.

“We focused on putting together a high-profile panel of judges that included those who would bring attention to the charities,” says Evans. “We’re extremely grateful that these people put their name next to what we were doing.”

Once the grant winners were selected, events were held in Dallas and Houston to honor them, as well as the other applicants.

On November 2nd, friends, families, colleagues and leaders and board members from 22 non-profits gathered at the Dallas Omni for a spectacular night of wine tasting, food pairings and $100,000 in grant awards to charities serving children and families.

The Dallas grand prize of $50,000 was awarded to Family Compass, an organization that specializes in child abuse prevention. “At the end of the day, our panel selected Family Compass because they determined they are in our ‘wheelhouse’ as a family law firm, dealing with children and divorce and its effects on the family,” Vanden Eykel explains.

In addition to Family Compass, Dallas grantees include Resource Center, Promise House and The Family Place which each received $10,000, and Hope Supply Co. and Alliance for Children each were granted $5,000.

On November 4th, those connected to eight non-profits gathered at the Houston Zoo for a day of face painting, animal demonstrations, a delicious feast in the Masihara Pavillion and $100,000 in grant awards given to charities that serve children and families.

“We invited children from each of the grant applicants to come to the Houston Zoo and gave them t-shirts and goody bags. There were close to 1000 people in attendance,” says Evans. “It was a magical evening and a great family event; our families were there with the families from the charities.”

The Houston grand prize of $50,000 was awarded to Small Steps Nurturing Center, which works with at-risk pre-school children in underprivileged areas in the city. “Small Steps helps working mothers take care of children and keep them off the street,” says Evans.

Along with the grant to Small Steps Nurturing Center, Houston grantees include Bo’s Place, which was awarded $20,000, as well as Casa de Esperanza de los Niños and ChildBuilders, given $10,000 each.

In addition to the $200,000 contributed to KoonsFuller Family Law Foundation, and as of October 2018, the firm has also contributed more than $75,000 towards various non-profit organizations throughout the state.

At each event the charities presented a video about what they do, which gave them the opportunity for exposure to an advantageous group of attendees.

“We were able to completely meet the needs of some organizations,” Evans says. “Small Steps wants to add a pre-school, and it wasn’t only the money that we were able to give them, but also the exposure, which is equally important to them.”

The grants, says Vanden Eykel, are not going to be a “one and done.” The firm plans to come back on a yearly basis to invigorate the charities with which they’re involved. He says he has received many thank you letters, and he assured every charity that they’d be back again.

“We’re passionate about what we do, and we try to do the best for our clients, but that’s our job,” says Evans. “This is something we do because we want to.”

In fact, those at KoonsFuller hope to get those with whom they work, such as accounting firms, corporate attorneys and more, involved in the effort.

“Our goal is to get businesses and organizations that we deal with to get involved and give to the KoonsFuller Foundation,” says Vanden Eykel “We’re hoping it will catch on.”