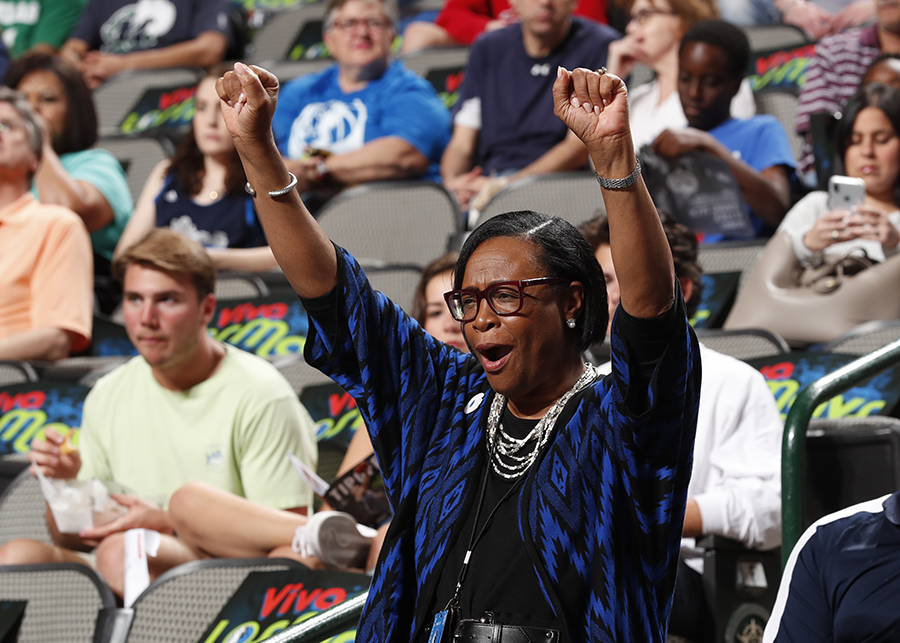 Rebuilding a corporate culture as the first black woman to head an NBA franchise is a win-win situation. Rebuilding the life of a child is a slam dunk.

Cynthia Marshall has done both and more. Not only did she survive domestic abuse, beat cancer and overcome racial barriers, the CEO of the Dallas Mavericks is now transforming the basketball team’s corporate culture to be more inclusive and diverse. As a mom, she’s given her four adopted children a warm, loving environment in which to grow and prosper.

Born in December 1959 in Birmingham, Alabama, Marshall’s family moved to Richmond, California, near San Francisco, when she was a baby. Her parents didn’t want to raise their children in the Jim Crow segregated South. Her mother was a member of the 16th Street Baptist Church in Birmingham, which was later infamously bombed by a white supremacist in September 1963, killing four little girls.

The family of eight lived in a housing project, where in addition to being surrounded by external violence, Marshall, her mother and five siblings were subjected to abuse by her father. She didn’t allow her situation to get the best of her. “My mother always said, ‘It doesn’t matter where you live, it’s how you live.’ She handed me a math book and a Bible and said keep your head in these and you’ll get out of here,” Marshall explains.

In sixth grade as Student of the Month, Marshall was taken on a special field trip to see My Fair Lady in San Francisco. She now realizes the educators did so to expose children to new experiences. This experience inspired her to work hard, and she graduated at the top of her school district. She earned five full college scholarships and attended the University of California Berkeley, staying close to home, as her parents had divorced.

Marshall remained so focused on her studies at Berkeley that when her boyfriend transferred to San Francisco University to be closer to her, she informed him her first priority was her studies but that she’d call him the day after she graduated. She did so, and he said he was engaged. Marshall invited him to attend a friend’s party anyway, and now they’ve been married 35 years.

After college, Marshall received 13 job offers and chose Pacific Bell (currently AT&T), where she worked for 36 years until retiring in May 2017. She had a successful career as one of the top female executives and as the top African-American in the company.

Marshall was consulting when she got a call from Dallas Mavericks owner Mark Cuban, who said he wanted to meet with her.

She agreed to meet but said she had a mammogram appointment first. Marshall told Cuban she’d learned the hard way not to skip doctor appointments. In 2010, Marshall was diagnosed with Stage 3 colon cancer, just one lymph node away from Stage 4. She underwent chemotherapy treatment and has been cancer free since.

Marshall executed a 100-day plan for the Mavericks parallel to an independent investigation during the first #MeToo crisis in the NBA. “I made sure women here hold permanent positions as they, too, deserve a career in sports,” she notes. “Changing the culture is a team effort; I couldn’t have done it myself. The employee survey results show that women now represent 44% of the company, and there are more women of color at the table.”

While nurturing her career, Marshall also had the desire to nurture children. After trying for 10 years to get pregnant, four second-trimester miscarriages and the pre-mature birth of her only biological daughter Karolyn, who passed away at 6½ months old, Marshall nearly abandoned her dream of motherhood.

Her husband Kenny convinced her to adopt. The adoption agency suggested they foster disadvantaged children and recommended that the Marshalls attend a county meeting to learn about those kids.

As fate would have it, they took in a two-year-old African-American boy whose drug-addicted mother abandoned him at nine months old and left him in the care of his 9-year-old brother. The police found the boys and ultimately each went to a group home. Eventually, the younger brother was adopted by the Marshalls and Kenneth Anthony, as they call him, is now 26 years old.

After Anthony’s birth mother passed away, he was reunited with his 14-year-old brother Ricky. While Ricky was close with his foster family and chose not to be adopted by the Marshalls, he still considers them his “second family.” The Marshalls also adopted two daughters after Anthony saw them featured on television as children who needed a home. Shirley is now age 23 and Alicia is 20.

“Permanence and stability for our children are very important to me and to my husband,” says Marshall. “All of these kids belong to all of us.”

Today, Marshall and her husband are active with Court Appointed Special Advocates (CASA). She works with the philanthropic arm of her consulting company, mentoring kids to get them to and through college; the Boys and Girls Clubs of America; the American Cancer Society, and she serves on a number of boards at her church.

For her strength and love in caring for children in need, her tireless commitment to the betterment of others and her dedication to improving the workplace culture for women, we award Cynthia Marshall the Very Inspiring Parent Award.

Our Very Inspiring Parent (VIP) Award honors the everyday, and not-so-everyday, heroes in our midst. Those whose tenacity, integrity and courage inspire others to exemplify the same character and put their families and community first, in spite of the challenges life has thrown at them. For complete details or to nominate visit goodLIFEfamilymag.com or email Tricia@goodlifefamilymag.com.

Girl Scouts Can Get Free Shakes at Kenny’s Burger Joint

Keeping Healthy for Your Generation