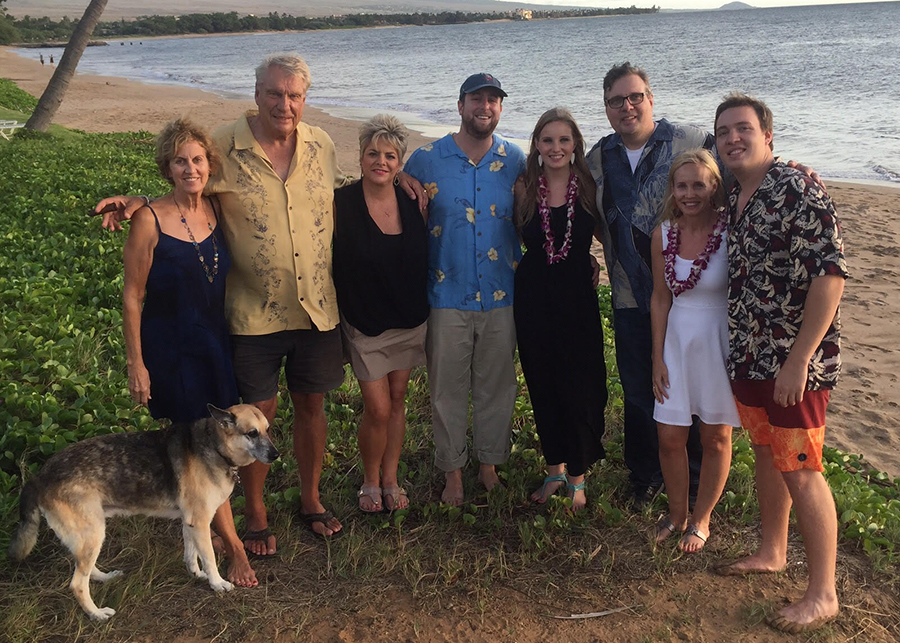 The Legendary Family Opens Up About Family, Philanthropy, Faith, Heroes, and, of course, Basketball.

For the Nelsons, the “family business” is basketball.  Patriarch Don Nelson is a legendary NBA player and coach, named one of the top 10 coaches in NBA history.  His son Donnie has made a tremendous impact on the game in his own right.  He has served as an NBA scout and coached both in the NBA and for five international Olympic teams, but it has perhaps been in his current roles as general manager of the Dallas Mavericks and as co-owner of the G-League Texas Legends that he has gained the most acclaim, having been ranked by Sports Illustrated as one of the top 3 best personnel administrators in the NBA.  Now he’s proud that his children DJ and Christie are carrying on the legacy.

Donnie grew up with basketball as a backdrop. “Besides family, faith and friends, sports have defined the man I am today,” he says.   He sees much of sports as a microcosm of life – the trials and tribulations and the successes.  “When the body and human spirit are pushed, it makes an impact,” he explains.  His own family is proof.  They came from humble beginnings – his grandfather was a hog farmer in Iowa who literally lost everything, and Donnie’s dad reminded him often of the importance of maintaining a sense of humility and working hard.  They are lessons he’s imparted to his children as they, like him, grew up with the sport.  His daughter Christie Nelson Armstrong says, “Basketball has always had and always will have a very special place in my heart because it reminds me of family and the hard work all the men in my life have put forth to the sport of basketball to create shoes I can only wish to come close to filling.”

Donnie feels blessed to now be working with his children and lucky that they had a chance to be exposed to the sport and chose to get involved.  DJ is now an Assistant General Manager for the Legends, and Christie is their Chief Marketing Officer.  Most likely it’s because they’ve spent a lifetime seeing him do what he truly loves.  “I pinch myself every day,” Donnie says.  “I feel like it’s not really work when you do what you love every single day.”  He admits that he goes to bed most nights thinking how to make the teams better and wakes up ready for the next day.  He’s living his idea of the American dream.  Having found his passion and a way to make a living with it is all he could ask for.  He admits he would have loved to have played basketball professionally early on, but he found his way to what has ultimately been a job he was meant to do.

He may have followed his heart to the game of basketball in his professional life, but in his personal life, it’s his wife Charlotte (“Lotta”) who has been his rock.  “She’s the soul of our household,” he says.  Daughter Christie agrees.  “My mom is the absolute glue to our family.  She is the voice of reason and is truly the best friend to all three of us,” she shares.  With Donnie traveling so extensively while the children were growing up, including 22 summers when he was away coaching the Lithuanian and Chinese national teams for the Olympics, the brunt of parenting often fell on her, although Christie says her Dad was always their biggest supporter and at every event when he was home.  “My two kids are who they are today because of her (Lotta’s) influence,” Donnie says.  Christie adds, “She has the biggest heart of anyone I’ve met.”

Having a big heart is a family trait, too.  Now that Christie, DJ, and even son-in-law, Blake Armstrong (V.P./Assistant General Manager), are part of the Texas Legends team, of which Donnie is a co-owner along with Mark Cuban and Evan Wyly, they are all involved with the community outreach of the organization.  The Texas Legends name itself and its original logo were developed specifically to honor the community heroes around us.  “My number one priority,” Donnie says of his philanthropic endeavors, “is the men and women who protect our freedoms every day.  They make this country what it is. It’s a rare breed of person who puts on that uniform, whether in the Armed Forces, as a nurse, a police officer, firefighter or teacher, especially in this day and age.”  Christie adds, “There are a lot of people out there doing so many great things in our community, and we can never do enough to provide them the recognition they deserve.  “The sport of basketball is an amazing platform that brings people together, and I am very proud of what he created for the community.”  At every home Legends game, the team honors a local “real-life” hero, and among the outreach programs through the Texas Legends Care non-profit, they reach out to disadvantaged youth, even bringing busloads of children to their first basketball game.  He sees his role with the Legends organization as “one of the greatest things I’ve ever done in my life.”

The Nelsons are an extraordinary family, who have and continue to touch the world of basketball, but more importantly, it’s a family committed to each other and to the community they live in.  As he’s traveled the world, Donnie is grateful for the different cultures he’s seen and experiences he’s had, but in the end he just loves coming back to Dallas, to the family and teams he loves.  Christie shares, “We have been blessed to be in Dallas for over 20 years.  Through good times and hard times our family has always been close and stuck together through it all.”  Donnie just says, “I’m the luckiest guy in the world.”

Lessons Donnie learned from dad Don:
• Never forget where you came from

• Don’t be afraid to be creative

• Do what you love every day

• And from his mom: Find the good and praise it

Lessons Christie learned from dad Donnie:
• Always put others before yourself

• Whether you pass by an attendant in an arena or a CEO, always make people feel loved and respected

• Relationships throughout your life and career are extremely important

• 1 Corinthians 13:  “And now these three remain: faith, hope and love.  But the greatest of these is love.”

Everyone Has a Story to Tell. What’s Yours?

Beyond Pumpkin: Fall Colors for Women Should Also Include Teal, Pink, and Red

13 Resilience-Building Tips for Kids in a Crisis-Prone World