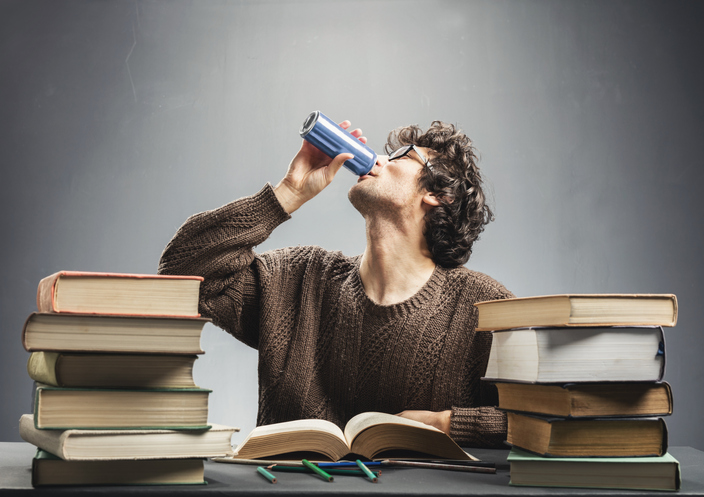 With the stress of final exams approaching for many students comes long hours of late night studying and in turn a lack of sleep. Many students are looking for an edge to stay focused for extended periods of time. While it may seem like the best approach, some could come with potential risk and harm

Energy Drinks
Energy drinks have been labeled a dietary supplement within the marketplace and considered to be the highest in increasing consumer penetration. It is estimated that the US sales of energy drinks reached $21.5 billion in 2017.

The standard energy drink with 100-200 mg of caffeine is not the major concern. The concern lies with products that contain high levels of caffeine alongside multiple stimulants. Many products are combining caffeine with stimulants such as Guarana Seed, Yohimbe, and Yerba Mate. Combining high levels of caffeine with other stimulants may cause an electrical disturbance that can lead to a life threating arrhythmia (i.e. heart palpitations). As we’ve seen in several cases in teens and adults, it could lead to cardiac arrest and eventually death.

While energy drink ingredients such as caffeine have been widely studied, other ingredients haven’t and manufacturers are using mainly anecdotal evidence as justification of their use in their products. Consumers should be aware of the ingredients contained in energy drinks and make educated decisions whether or not these beverages are the best choice for their bodies, especially when trying to fuel an all-night study marathon.

Next Steps
Fueling the body properly is the natural energy solution to combat this issue and perform at your peak. Our ALL ME® Assembly on Nutrition and Dietary Supplement Safety educates youth and adults about the realities of dietary supplements and the importance of nutrition for sustainable health. Learn more and schedule a program for your school and community here:

Countdown to College: Tips to Help Students Find Their Fit