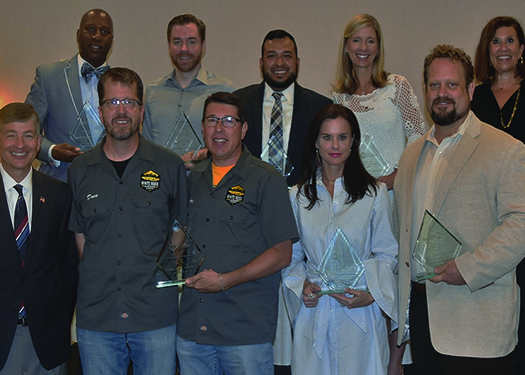 The Greater East Dallas Chamber of Commerce (GEDCC) held its annual Business Awards Luncheon on Tuesday, August 21 at the Lakewood Country Club. Over 20 excellent nominations were received and it was difficult to choose from all of the submissions. Five award winners were chosen:

JEB HENSARLING AWARD FOR BUSINESS OF THE YEAR: This award is given to recognize the outstanding East Dallas business of the year.

La Popular Tamale House
Located in Old East Dallas, La Popular Tamale House has been serving the best tamales in Dallas since 1984. It is a family owned restaurant founded by Jesse Moreno, Sr. which offers full service authentic, unpretentious contemporary Mexican food filled with the history and soul of the neighborhood. Jesse Moreno, Jr. continues the legacy of the restaurant and people come in from all over to enjoy the food and the company.

Many years ago they were nicknamed, “The Doctors of Tamalogy”, for their five stars tamales. They have been recognized with Best Tamales Awards from D Magazine, Dallas Obeserver, and the Dallas Morning News. They have even been featured in the national paper USA.

Mr. and Mrs. Moreno are lifelong residents of Old East Dallas and La Popular has been giving back to the East Dallas community since its establishment with an annual lunch on Thanksgiving Day and Christmas Day for those in need or for anyone who might not have family in Dallas. The Moreno’s are products of DISD and they continue to give back to all East Dallas DISD schools in form of food donation, monetary scholarships, countless hours of volunteer service. Working with the City of Dallas Parks and Recreation Department, and the community to redevelop local East Dallas Parks, Jesse Moreno has helped to create and restore local parks to give children a safe place to play before and after school.

The Moreno’s have been extensively involved with the Dallas Independent School District and have worked to rezone schools, to make much needed improvements, repairs and ensured that children have the supplies they need to succeed in school.

The Amelia and Jesse Moreno Scholarship Award benefiting Woodrow Wilson High School Seniors was established by Jesse Moreno Jr. (WWHS ‘04) in honor of his parents. This award is given to graduating high school seniors from Woodrow Wilson High School who have shown exceptional commitment to the East Dallas community through their regular volunteerism in community organizations.

CHAIRMAN’S AWARD: This award is presented for longevity in community impact and outstanding Chamber support by a business and/or an individual associated with the business who has made an outstanding contribution to the community and to the Greater East Dallas Chamber of Commerce.

Youth Believing in Change
The Chairman’s Award is for Youth Believing in Change as it approaches 24 years of impacting the community. Founded in 1995, Youth Believing in Change (YBC) is one of the longest-running after school programs in Dallas. Led by Dallas Theological Seminary graduate, Vince Gaddis and his wife Angela, YBC began with an open Bible and a few Dr. Suess books meeting in pizza parlors, parks, vacant apartments and churches until 2006 when philanthropist Trevor Rees-Jones provided them a challenge-match grant, which YBC tripled in 90 days in order to purchase their two-acre facility debt free.

Based on report cards and STAAR test results, 92% of YBC children improve 10-15% in reading, writing and math on STAAR tests. 90% maintain a GPA of 80 or better. 100% of students who remain in YBC until age 18 graduate from high school. 85% enroll in and graduate from colleges, while others enlist in a branch of the U. S. Armed Forces.Serving a diverse ethnic population of American born children as well as a largely refugee and immigrant population, YBC has college graduates from Baylor, NYU, SMU, UT Arlington, the University of Houston and local community colleges.

YBC students have earned graduate degrees from the School of Social Work at UTArlington, Perkins School of Theology and Dallas Theological Seminary.

ENTREPRENEUR OF THE YEAR: This award is presented for Entrepreneurial Achievements and noted Individual successes during the past year.

White Rock Alehouse & Brewery
Greg Nixon and Dave Kirk were two East Dallas locals with a mutual love of craft beer. White Rock Alehouse & Brewery was created to provide a community-based establishment in a fun and relaxing environment. It offers quality food and a wide selection of craft beers, brewed in-house as well as from reputable breweries across the country. While the locally brewed craft beer is the foundation, they take great pride in their food and the local dishes selected to complement the tailored beer menu.

Incorporating elements of White Rock Lake and the surrounding area into the design of theAlehouse, it is an inviting and casual destination for neighborhood residents and lake visitors that still feels like home.

Whether you’re on your way to or from the lake, or you’re just in the neighborhood and craving a pint of craft beer, you’ve got a seat at White Rock Alehouse & Brewery. Fall in love with one of their beers? Be sure to purchase a signature White Rock Alehouse growler to last until you visit again.

As part of the East Dallas community, the team at White Rock Alehouse & Brewery knows the importance of community. They support local groups and families with a comfortable space for gatherings and the chance to unwind. This month, they were a sponsor for Pulling Together, an epic tug of war event between Dallas and Fort Worth to fight children’s cancer and donated $1.00 from every WRAB House Beer Sold.

They are a member of the Greater East Dallas Chamber of Commerce and were part of the panel of five breweries at the Chamber’s June Luncheon.

LIVE LOCAL AWARD: This award is given to recognize a small business/small business owner in East Dallas, who is a community leader who supports and gives back to the community.

John Botefuhr – Adjust Chiropractic
Adjust Chiropractic is the conservative management of health through chiropractic care. The business was established in 2009 on Greenville Avenue in the back of a building that did not have any street presence. When that building sold, it moved to Garland Road near the Arboretum in 2011. Patients include weekend warriors with minor aches and pains, to people who have been in car accidents the same day.

John is on the Chamber’s Economic Growth and Development Committee and now chairs the Garland Road Vision subcommittee. He has worked and advocated for the Gaston/Garland/Grand project. He has networked with other business neighbors on Garland Road to organize a crime watch/prevention association for the businesses that have been affected recently.

Nancy Wilson – Coldwell Banker Residential
Nancy Wilson has been a part of the Coldwell Banker family for over 20 years. She has given back to the community in numerous ways including Lakewood Early Childhood PTA from 1995-2006, positions with LECPTA including Home Tour Coordinator, Silent Auction, membership and others; St. Thomas PTA; Lakewood Elementary PTA positions; W. B. Travis PTA President and other positions for 11 years; Woodrow Wilson High School Cheer parent; SBDM in charge of safety/security, PTA; Founder and Chair of Lakewood Crime Watch for 12 years which has 6 officers employed with a $125,000 budget; Founder of the Woodrow Wilson High School Peace Pantry serving all students at Woodrow healthy snacks during the day, provide meals on weekends and holidays as well as provide gently used uniforms for those in need (a model implemented in other DISD schools); an original member of the White Rock Lake Conservancy lake Safety chair; City of Dallas Police Review Board; Safer Dallas; Volunteer of the year for City Council District 9.

Ben Lauer – Lauer Real Estate Group
Ben has been a realtor since 2006 and began his independent brokerage in 2012. Average sales volume has put him in the top 5% of Realtors nationwide and since joining Keller Williams in March of 2017, he has become a member of the Associate Leadership Council and his group was honored as the #5 team in the office in 2017. The office has over 230 agents and this year, he is on track to be the #3 team in the office. His business has been built primarily on word of mouth in the East Dallas/Lake Highlands area and work to enrich the community I live and work in.

He is a founding member of 100 Men of East Dallas which has donated over $8,000 to charities local to our area.  That amount will grow as the organization grows. The group is made up of 100 like-minded gentlemen who want to make Dallas a better place. It meets once a quarter for 1 hour to hear presentations from three local charities. One of the three charities will be voted to receive $100 from each member. The winning charity will be directly given the total collected donations. Their next fundraiser is Sept 12th

He serves on the Chamber’s Board of Directors and is a member of the Legislative Affairs committee. He was a founding member of the East Dallas Young Professionals which was re-named and is now Business Networking.

R.S. Munger Business Pioneer Award – Anyone with business/community ties to East Dallas area who is notable for some technological, creative or business innovation.

Kathy Fielder Design | Life | Style
Kathy Fielder wears many hats ~ Lifestyle & Design Expert, Blogger, TV Host, Entrepreneur, Manufacturer, Philanthropist, Equestrian, Wife, Mother and proud Texan.  At the age of 22, Kathy started her first design firm, Studio Interiors, which was the launch pad for her successful career. Kathy’s vision, innovation, creative ideas, persistence, and meticulous work ethic helped propel her as a leader in the competitive design field, earning her numerous and multi-faceted awards. Fashion Group International nominated Kathy as a Rising Star in 2017 in the category of Interior Design, a prestigious award determined by a body of Fashion Group International members, community leaders, and fashion enthusiasts throughout the Dallas community.  Kathy will also be receiving the award for Entrepreneur of the Year by the nationally recognized Women That Soar organization.  Kathy now serves at the 2018 Public Relations Chair on the prestigious Fashion Group International board.

About the Greater East Dallas Chamber of Commerce

The purpose of the Greater East Dallas Chamber of Commerce is to promote the cultural, educational and industrial interests of the East Dallas Area so that its businesses, neighborhoods and citizens shall prosper.

The multifaceted approach of the Greater East Dallas Chamber of Commerce provides benefits to our members in a variety of different arenas. We offer a number of forums for the promotion of all of our member businesses. We are also proud to provide our members with relevant information regarding the East Dallas community, as well as insight into local, state and national government issues. The events that provide a conduit for these benefits, and others, include our monthly luncheons that highlight a variety of topics addressed by featured keynote speakers. We also present an annual Economic Summit – essentially a “state of the union” with respect to the Dallas Economy. Member businesses and guests are encouraged to gather and exchange information through our numerous networking events, especially our Business After Hours excursions, which are hosted by a spotlighted member business. Sponsorship opportunities abound for these events, as well as for many of our other Chamber gatherings. For more information, please contact the chamber directly.