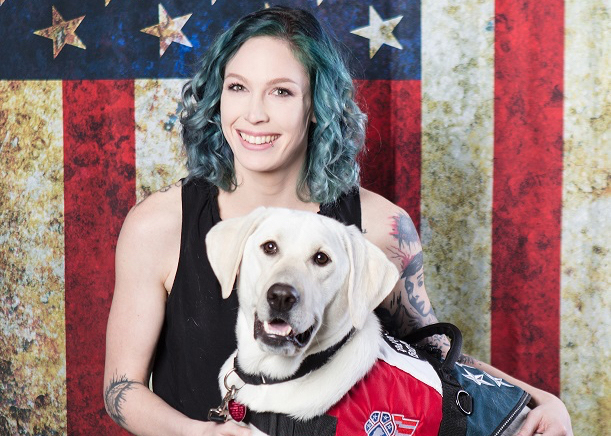 Patriot PAWS is Providing Trained Service Dogs for Our Veterans

The U.S. has approximately 200,000 military personnel serving overseas, and it is estimated that 11 to 20% of those deployed as part of Operation Iraqi Freedom or Operation Enduring Freedom in Afghanistan have symptoms of Posttraumatic Stress Disorder (PTSD).  More than 181,000 of those veterans are receiving disability benefits, and over 1600 lost hands, arms, legs or feet through amputation due to combat-related injuries.

Patriot PAWS, a local non-profit in Rockwall, Texas is working to help serve those who have served us.  Their mission is to train and provide service dogs of the highest quality at no cost to disabled American veterans and others with mobile disabilities and PTSD in order to help restore their physical and emotional independence. It takes two years to prepare a dog to go out to live with a veteran at an approximate cost of $34,000 for professional training, food, housing and medical care, and the organization receives an average of 400 requests per month for service dogs.  The dogs are life-changing for their owners.  Three recipients are highlighted here, and we look forward to sharing additional information on these servicemen and women at www.goodlifefamilymag.com and in our weekly digital updates. 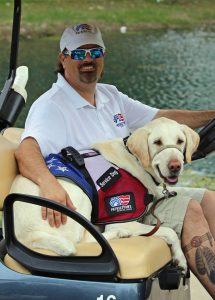 AARON MIXELL & CHIEF
Aaron retired after 20 years of service in the United States Army 3rd Ranger Battalion, achieving the rank of first sergeant.  During his service, Aaron spent over 15 years deployed to various locations overseas and was highly decorated for his service during combat operations including Operation Desert Storm, Somalia and Operation Iraqi Freedom.  While deployed to Iraq, Aaron was seriously injured in an IED blast.  During this, and other combat-related incidents, he suffered multiple injuries including Traumatic Brain Injury (TBI) and PTSD.  Aaron received Chief, his Patriot PAWS Service Dog, in 2015.  “It’s the things I don’t have to ask Chief for that change my life,” Aaron said.  “One of my injuries prevents me from putting my head below my heart so anything that hits the ground, Chief automatically picks it up without a cue. If I lay down in bed and can’t get up, he’ll tug me out of bed, and he’ll get my shoes if I can’t reach them.”  Thanks in large part to Chief’s presence in his life, Aaron’s mobility and stability is much improved as is his PTSD.  After a long, difficult recovery, Aaron now works with the Patriot PAWS staff as a Veteran Coordinator and is enjoying life with his wonderful wife and six children. 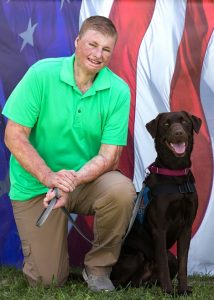 MICHAEL LAMMEY & STAN
US Navy MM1 (SW) Michael Lammey of Texas served on board the USS Frank Cable AS-40 in Guam where he operated the ship’s main propulsion boilers. Michael was severely burned in a boiler accident, which resulted in a great loss of mobility and initially a complete dependency upon his family during his many surgeries and long and painful recovery. He has also been diagnosed with PTSD.  In April 2017, Michael received service dog Stan, a male chocolate Lab. Michael said, “I have fought to become more independent and relieve the burden on my family.  With the advanced training of Mr. Stan, my family can finally stand down because I now have a buddy that loves to help and look after me!” 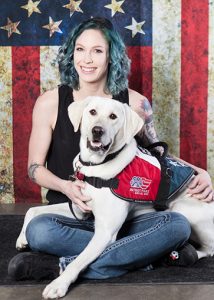 FREEDOM MARIE GREEN & GUS
Freedom Marie Green is a U.S. Army combat medic veteran. Gus became Freedom’s Patriot PAWS Service Dog in November 2017.  “Being loved by Gus is the greatest gift. He is my best friend, and I am grateful every single day to wake up to his happy face. He is my companion in all things and has done more for me than I ever thought possible. Patriot PAWS is the most incredible organization full of the most amazing people, and I am so lucky they welcomed me. Though I can never repay them for their kindness, I am a medical student, and my hope is to one day pay this life-changing experience forward to another veteran. I know I still have a long way to go, but with Gus by my side and Patriot PAWS at my back, I look forward to the journey.”

Editor’s Note: It takes two years to prepare a dog to go out to live with a veteran at an approximate cost of $34,000 for professional training, food, housing and medical care, and the organization receives an average of 400 requests per month for service dogs.  To learn more or to support this worthy cause, go to www.patriotpaws.org.