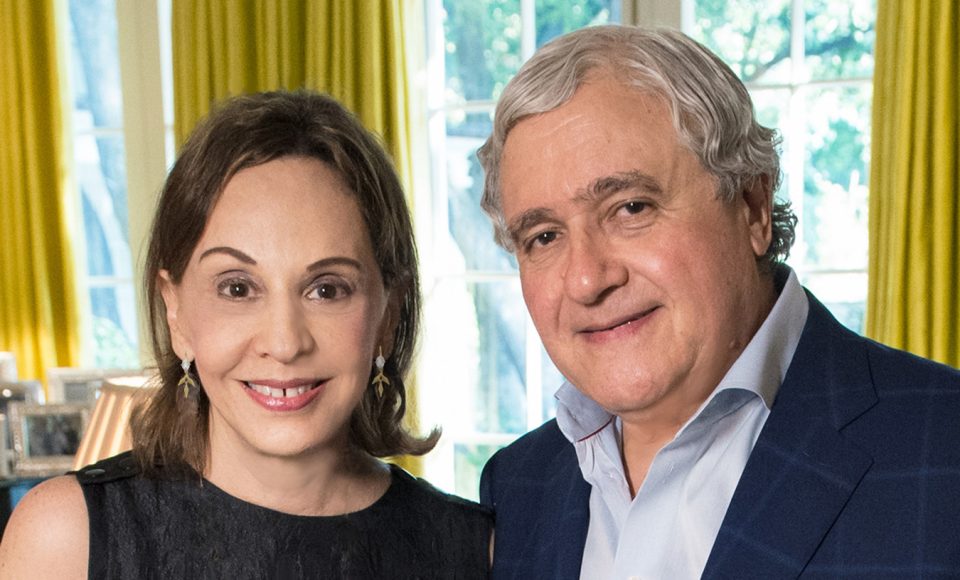 DALLAS – May 25, 2017 – The Family Place is pleased to announce Joanne and Charles Teichman will serve as honorary chairs of Partners Card, presented by Bank of Texas, which is celebrating its 25th anniversary this year. Brynn Bagot Allday and Jennifer Burns will co-chair Partners Card, the signature fundraiser for The Family Place, Dallas’ largest and longest-serving family violence agency. In 2016 alone, more than 750 retailers and restaurants participated in the Partners Card program and more than $1 million was raised to support The Family Place’s mission to provide life-saving shelter and support to women, men and children experiencing family violence.

Partners Card Honorary Chairs Joanne and Charles Teichman have made an impact not only in the designer jewelry business but also in the charitable community over the years. After getting a bachelor’s degree in Journalism and Marketing, Joanne earned a master’s degree in Journalism. She spent four years at Procter and Gamble in brand management and also served as Vice President of three New York advertising firms. Charles received his degree from Paris Law School and moved to New York as a retail consultant. The two met at a charity fundraiser in New York City and made Dallas their home in 1985. The couple then opened Ylang 23, now an internationally recognized retailer and e-tailer of designer jewelry. Thirty-two years later, their love for the Dallas community and business success has fueled a passion for giving back. The Teichmans donate regularly and generously to charities helping women and children; most prominently to The Family Place. They were early supporters of Partners Card with Joanne serving on the Retail Advisory Board, and Ylang 23 selling countless cards and raising thousands of dollars during its annual Cathy Waterman Trunk Show. In addition, Joanne and Charles have both served as past chairs of The Family Place Palm Night and the North Texas Food Bank Letter Writing Campaign. Charles currently serves on the Board of the Dallas Holocaust Museum, and Joanne was recently honored with the North Texas Food Bank Golden Fork Award. The Teichmans also support the Human Rights Museum, The Vogel Alcove, The Stewpot and Jewish Family Service.

“Joanne and Charles Teichman have supported Partners Card from the beginning in more ways than one, and it’s only fitting that we recognize them in our 25th anniversary year. We are grateful for people like the Teichman’s and retail stores like Ylang 23 that keep the Partners Card program going,” said Melissa Sherrill Martin, vice president of development at The Family Place. “Partners Card also depends largely on our chairs who help the program grow each year, which is why we’re so appreciative of Brynn Bagot Allday and Jennifer Burns who have shown continuous dedication to Partners Card and have both come back to co-chair Partners Card 2017.”

With more than 18 years of experience in planning and production within the events industry, Jennifer Burns is currently director of sales and marketing at BEYOND, where she uses the latest in technology and trends to create exciting visual and sensory experiences to define her clients’ vision and message. Jennifer has worked all over the country and in international locations such as London and Beijing. Aside from creating experiences for clients, Jennifer is dedicated to volunteering with many Dallas charities. She has served on the Taste of the Cowboys Host Committee, been the Logistics Chair for the Ronald McDonald House Under the Moonlight Gala, co-chaired both the Birthday Party Project Turns 4! Silent Auction and the Birthday Party Turns 5! Jennifer previously chaired Partners Card in 2009, served as the Partners Auxiliary President in 2013 and is now proudly a 2017 Partners Card Co-chair.

Dallas-native Brynn Bagot Allday is president of Brynn Bagot Public Relations, which she founded in 2001. While steadily rising in her career, Brynn has been actively involved in numerous organizations, including: Junior League of Dallas (Sustainer), National Charity League – Silver Star Chapter, Cattle Baron’s Ball benefiting the American Cancer Society, The Family Place Partners Auxiliary and the Chi Omega Alumnae Association of Dallas. She has held board positions for Attitudes & Attire,™ The Family Place Partners, Dallas Challenge, Inc., The Family Connection and the Dallas Chi Omega Alumnae Association. Brynn also served on the executive committee of Côtes du Coeur benefiting the American Heart Association for several years and received the American Heart Association/Dallas Division 2000 Award of Merit for her public relations work on behalf of the event. In 2003, she received the Chi Omega Symphony Award, and in 2006 was recognized as a Dallas Business Journal “40 Rising Stars Under 40.” Brynn served as co-chair of The Family Place Partners Card in 2005 and has again, graciously accepted the role of Co-chair for Partners Card 2017.

This year, your favorite shopping card is available digitally. With the Partners Card App you can buy or gift a card, view participating stores, see upcoming Partners Card events and more. The Partners Card App is free and available for both iPhone and Android. The annual 10-day shopping extravaganza is set for October 27 through November 5, 2017, and one hundred percent of the proceeds from card sales directly benefit The Family Place and its programs.

ABOUT THE FAMILY PLACE

Since 1978, The Family Place has counseled more than 225,000 clients in residential and outreach programs. In addition, the agency has provided life-saving shelter to more than 22,000 women and children and has answered more than 550,000 calls for help. For more information, please visit www.familyplace.org or call (214) 559-2170.