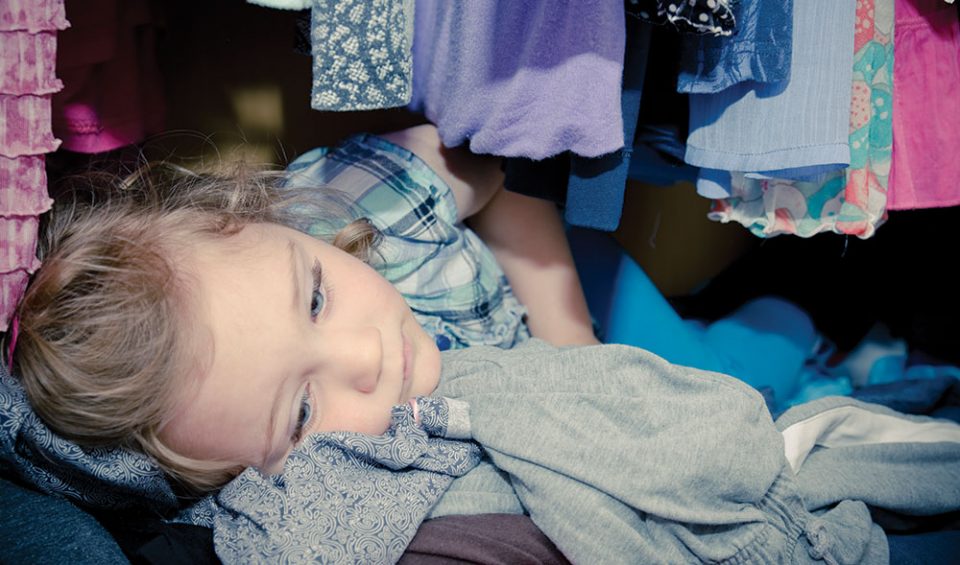 A glimpse into the life of a 23-year-old who witnessed domestic violence as a child, held onto the secret with all her might, and ultimately found healing in sharing her story.

“I am a victim of domestic violence.

Up until the past year, I never placed a label on my childhood trauma or categorized what I experienced as domestic violence. After all, it didn’t happen directly to me. I just watched from underneath the closet door.

My memories still impact me to this day, but I always thought what I experienced was not domestic violence because I was not hit, right? It was a secret, a secret for only my Mother and me.

My Mother left when I was six months old, and my Father later divorced her because of her infidelity.  From all accounts, my Mother developed a severe meth addiction shortly after, which led to a long road of bad choices. My Father, whom I love dearly, raised me with his new wife, and later alongside my half-brother and sisters. The courts allowed my Mother to take me every other weekend. The majority of the time she would never show, but when she did, I was filled with excitement to see her and also fear of what would happen when she would take me away from my Father. I would kick and scream and throw myself down on the sidewalk pleading not to go.

It started when I was about five years old. I can’t recall the first time that it happened or the last, but I can recall many times in between. There were lots of drugs and plenty of arguments every time I went to see her. My Mother’s boyfriend would put me in the bedroom closet and shut the door when it was about to happen. I would cover my ears as hard as I could and close my eyes hoping that it would be over quickly, but I could still see glimpses from underneath the door.

Eventually, she left her abusive boyfriend and married another man, I thought everything was finally going to be okay. And it was… for a short time. But once the arguments and beatings started, I knew my place was behind a closed door. I repeated the same routine of covering my ears and later watching my Mother cover up her bruises and busted nose with makeup, yelling at me if I tried to talk to her about the abuse. Telling my Father was never an option—she assured me this was not something to share with him.  (My Father experienced child abuse from his drunken dad, and I felt the need to protect him from further heartbreak. I never wanted to make him feel like he was a bad father to me, so I never told him what was really going on.)

As I reached my teenage years, my Mother stopped coming around almost completely, and her second husband was sentenced to ten years in prison for dealing cocaine and meth. Unfortunately, my suffering had not yet ended. I developed a severe panic disorder and emetophobia (an intense phobia causing anxiety over vomiting) as the result of my experiences and would hide in the bathroom for hours, sometimes sleeping on the floor until I could crawl into bed. For me, being behind a closed door meant safety, a security blanket. Although my Father never really understood the root of my symptoms, he did attempt to seek medical help for me.

During my college years, I lost a significant amount of weight and was practically living on the bathroom floor of my apartment, rarely eating or leaving except for classes. I hit rock bottom where I knew living like this was not really living. I finally made the decision to see a campus psychologist who specialized in anxiety disorders. Even after graduation, I have continued to see my therapist for over a year and a half now, and she has helped me tremendously, changing my life in ways I never thought possible.

For so many years, I felt ashamed to talk about my experiences because of the guilt from keeping the secret and the fear of how people would look at me if they knew. Even as an adult, I have yet to discuss the details of the abuse with my Father. On some level, I still want to protect him, but I also want to focus on moving forward and away from what used to control me.

I have learned that bottling everything up and trying to keep my experiences a secret only caused me more pain, which is why I am sharing my story now. (I am still protecting others—for better or worse I don’t know—which is why I have chosen to do so anonymously). I know that therapy does not work for everyone, and we must each cope in our own way, but for me, finding the right therapist made a huge difference in my life.

Because of therapy, I was able to make the ultimate and difficult decision to cut off my Mother entirely. I knew that allowing her to continue the same behavior she did when I was a child, wreaking havoc by coming and going into my life at her personal whims, was only causing further pain by continuing the heartbreaking cycle. Setting a firm boundary to steer clear of her (and not feel responsible for her) helped me get closure and look forward to the future instead of reliving the past. Although a part of me will always love her and wish that things could have been different, I know that keeping her in my life would only hurt me. It has been five years since I have seen her, and I no longer feel the need to condone her behavior if she attempts to reach out to me.

My decision wasn’t a cure-all. I have good days and bad days, but I no longer feel like I am walking around with this toxicity in my life. I wake up and take each day one at a time and handle my panic attacks as they come.

I no longer live weighed down by the choices of my Mother or what she exposed me to. I am not cured, but I am free. I am a survivor of domestic violence.”