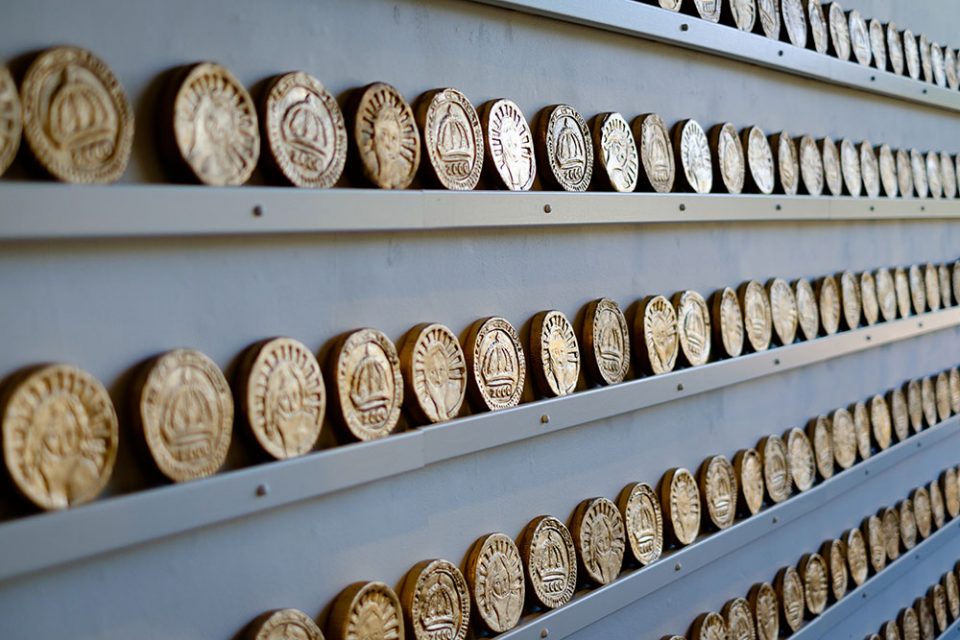 Richland College art professors Jen Rose and Marian Lefeld are raising awareness about the epidemic of sex trafficking in the U.S. with “In You We Trust,” an art exhibit that gives a tangible representation of children sold on the streets each year. The exhibit is on display now through Oct. 16 in the Brazos Gallery on the Richland College campus.

The Dallas Independent School District reports that approximately six thousand of its students are homeless, and studies from the National District Attorneys Association estimate that one out of every three children will be approached by a pimp within 48 hours of being on the street. Staggeringly, this means that 2,000 children are potentially sold each year in Dallas alone.

With that devastating number in mind, Rose and Lefeld created plaster molds of coins and recruited volunteers to help cast 2,000 ceramic coins, one for each child in Dallas potentially sold into sex trafficking. Each coin has a face on the front that was designed by Lefeld, and Rose designed the crown depicted on the back of each coin. The coins represent the practice of using children as currency, and the exhibit name, “In You We Trust,” is a call to action for the audience to not turn a blind eye to sex trafficking.

“In You We Trust” began in January when Rose and Lefeld attended a training session and lecture hosted by Traffick911, a group who works with law enforcement to identify victims of sex trafficking. Rose and Lefeld were interested in applying for a grant from the Dallas Office of Cultural Affairs, and after attending the session with Traffick911, they knew what their subject matter would be.

“The coins give a tangible representation to the statistic of 2,000 children sold on the streets each year,” said Rose. “We chose coins because pimps view these children as currency and have also been known to brand their victims with coin tattoos. The use of coin imagery was told to us anecdotally by a Traffick911 volunteer.”

After spending several months developing prototypes and perfecting a creative process that would allow for volunteers to assist, Rose and Lefeld began the process of creating the 2,000 coins. The project is culminating in the exhibition at Richland College. During the exhibition, lecturers from Traffick911 and other organizations will educate the community about sex trafficking.

“’In You We Trust’ is a wonderful example of how art meets activism,” said John Spriggins, the Richland College gallery coordinator. “Jen Rose and Marian Lefeld have demonstrated their willingness to tackle a very controversial topic in a creative and thoughtful way. Both Rose and Lefeld are reaching beyond the college campus into the community, conducting work sessions with organized community groups that participate in their creative process. The benefit of having resourceful, socially conscious and community-minded faculty like Jen and Marian at Richland College will have a lasting impact on students, faculty and staff. Having secured funding from the Office of Cultural Affairs, this exhibition is proof that supporting the arts can have substantive results.”

Upon the ending of the exhibit at Richland College, Rose and Lefeld hope to raise enough money to have 1,000 of the coins travel to other parts of Texas and the U.S. to be put on display and raise additional awareness of sex trafficking.

To help cover some costs that were not funded by the grant and to realize the goal of traveling the exhibit, a GoFundMe fundraiser has been set up, with donors receiving one coin for each $50 donation to the project. Any money raised that surpasses their goal will be split with Traffick911.

Those wishing to donate to “In You We Trust” can visit gofundme.com/inyouwetrust. Additional information on sex trafficking is available at traffick911.com.