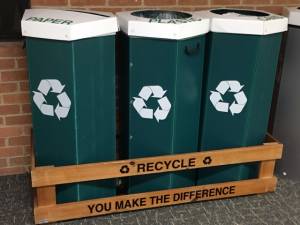 Richland College showed its green side with a campus-wide recycling rate of more than 82 percent during the spring semester, earning the grand champion prize in RecycleMania, an annual competition for college and university recycling programs.

Each spring since 2001, colleges and universities across the U.S. and Canada report the amount of recycling and trash collected for a period of eight weeks and are ranked in various categories based on which institution recycles the most on a per capita basis, which schools have the best recycling rate as a percentage of total waste and which schools generate the least amount of combined trash and recycling.

The 2016 tournament ran from Feb. 2 through April 7, with 350 schools participating from 48 states in the U.S., the District of Columbia and Canada. During the competition time, participating schools recycled or composted 79.3 million pounds of recyclables and organic materials. This prevented the release of 122,000 metric tons of carbon dioxide equivalent into the atmosphere, or the equivalent of the annual emissions from 24,000 cars.

“After consistently being the best in Texas, it’s so great to be able to win the national award this year for RecycleMania,” said Jerry Owens, Richland College assistant director of facilities services. “The program closely aligns with Richland College’s vision to ‘build sustainable local and world community.’ A lot of effort has gone into recycle awareness and sustainability on our campus, and we are thrilled that it really paid off.”

For more information on the competition, visit www.recyclemaniacs.org.