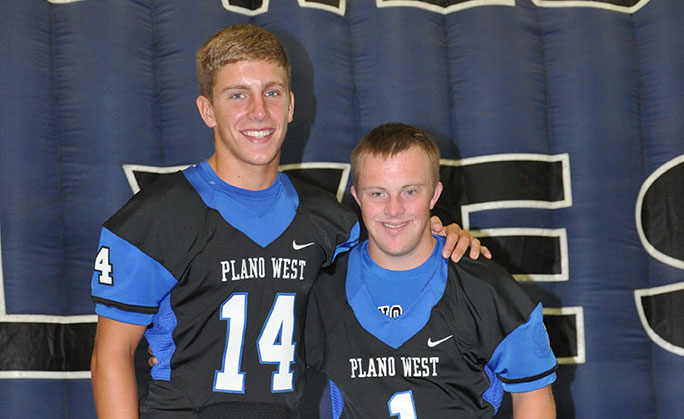 Four teens share their heartwarming lessons in protectiveness, patience, acceptance, and love for their special siblings

We often hear from the parents how much of their day-to-day attention is justifiably spent on their child with special needs. But, we wondered, what is it like to be the brother or sister? So we asked some siblings to share their thoughts…

A TALE OF TWO CHILDREN

Over the course of my satisfying (albeit short) seventeen years of life, I’ve experienced the best of times and the worst of times within my very own household. As the sibling of a child with a disability, my day-to-day life surely differs from those of most other kids my age. When I was about three years old, my younger brother Jackson was diagnosed with autism spectrum disorder. I didn’t understand it at the time, but this diagnosis changed my life forever.

Being Jackson’s sister can be tough; I sometimes feel as though my parents hold me to a higher standard. High grades and good behavior are simply expected of me, but for Jackson, these same behaviors often warrant a reward. As I’ve gotten older and more mature, I’ve realized that Jackson and I are entirely different children. When I was younger, I wanted my parents to treat me the same, and I often felt like I was denied attention or uninformed about what was going on within my house. Sometimes I felt pushed aside like an unwanted toy when my parents focused on Jackson’s well being rather than on mine. Looking back now, I am embarrassed that I ever felt this way.

My parents, especially my mom, spent a lot of time with Jackson because he simply needed the extra help. Unlike me, he was not a natural self-starter; the years Jackson spent in therapy accompanied by my mom were to teach him the qualities that to me, were instinctual. I applaud my parents for recognizing the defining features of both of their children, and although it took some time for me to appreciate their actions, I know they have raised both Jackson and me to be the virtuous individuals we are today.

A Little Something Extra

Growing up with my brother Alec has opened my eyes and my heart to all kinds of people.  My brother Alec was born with a little something extra; he has Down’s syndrome, and he rocks his extra chromosome.   Alec has helped me realize that life is not about what a person looks like, how smart they are, or how they talk. Who they are on the inside is what matters most. Many people perceive Alec as someone who is “different” but once they get to know him, they quickly learn that he has a heart of gold.  He has the ability to turn anyone’s bad day around with his infectious smile and cheery wit.

Throughout my life, Alec has proven to me that anything is possible. Watching him excel at the things he is passionate about, whether it’s playing basketball, swimming, lifting weights, wakeboarding, or scoring a touchdown in a football scrimmage, forces me to realize that the excuses I try to sell myself about struggles in my life, or my friends’ lives, are nothing compared to what Alec and kids like him overcome every day.  Watching Alec work so hard for what he wants, without giving up, and without excuses, gives me a clear perspective of what makes a true champion.

Many, if not all, families struggle with some type of adversity or unfortunate circumstance. What others may perceive to be a hardship for my family, we see as a blessing that most will never experience or understand. My family is different, but I would not change it for anything. In so many ways, I look up to my older brother and aspire to be more like him. He does not judge or manipulate. I am not even certain that he is aware of his differences. Alec is an absolute joy to be around, and he is a constant reminder of what is important in life.

Being the Sibling of an Autistic Brother

Usually when people think of siblings, they think of arguments, tattle tales and people who just don’t get along with each other, but that’s not true for my brother Seth and me. My parents always remind me that when Seth and I were very little, I would always ask them, “Why won’t Seth play with me?” Their response would be, “He will play with you eventually, just be patient.” After many years of patience, we started to play games together and had so much fun. We played ball and did puzzles.

When he got to 6th grade, he participated in a program at his school, which allows normal children to interact with the special needs kids. I think that this is an amazing program, and he really enjoys it. Other than me, he now has tons of (mostly female!) friends who come to the house and go with him to fun places such as Jumpstreet. Since we have been together for so long and I have always been there to help him, it’s a bit weird having someone else there to help out, so I still feel the need to go with him. Plus I think he feels more comfortable when I’m there. Every day I notice that Seth listens to me even more than my parents, and I think that’s awesome!

Just the other day, while he was swimming in the pool (his favorite activity to do in his free time), he began throwing a tantrum. My parents tried multiple times to get him out of the pool. A couple of minutes later, I asked if I could get him out, thinking that he would listen to me. The first time he didn’t come out, so I tried again. The second time I said, “Seth, come on. Let’s go get some pasta.” Since he is non-verbal, he makes hand gestures to tell us yes or no, so he made a closed fist and shook his wrist up and down, telling me “yes.” He still didn’t come out. The third time, I repeatedly said, “Come on Seth,” and eventually I got him inside to eat.

It’s not very often that he throws a fit, tantrum, melt-down (or whatever you want to call it), but when it does happen, it can range from long, loud and painful to short and loud. There have been some times when he will grab me and scratch me out of anger, but I have learned ways to protect myself. I’m pretty used to it by now. Although he gets upset on occasion, he mostly has good days. Those days are my favorite. He’s all lovey-lovey, will give me tons of hugs and kisses, and is constantly laughing and smiling and begging me to play with him.

My parents always have to take him to speech and other therapies so that takes most of their time. I understand that he needs a lot of attention, so it doesn’t bother me too much. When I do get time to spend with my parents, it’s usually at lunch during school. They bring me lunch, and we just sit down and talk. Other times, I spend “alone-time” with either Mom or Dad, going on “girls’ day out” with Mom or playing board games (or getting ice cream!) with Dad.

Seth has made me more mature for my age and has taught me so many things without even realizing it. For example, he has taught me to be more patient when he is not responding to questions right away or when I try to understand what he needs, whether it’s through the iPad or hand gestures. So being his sister definitely comes with a ton of responsibilities, but it has made me the person I am today, and I will do anything for him.

Being a brother to Jane* has been the best blessing that I have ever been given. Having a sibling with special needs has had its ups and downs over the years, but those ups and downs have molded me into the person I am today. Perhaps the years that impacted me the most were during my high school years (Jane was one grade above me).

Freshman year was very rough for me, mainly because Jane was struggling with anxiety and depression at our high school. That year, I had to deal with a lot of her emotional problems in school, and this set me apart from the other students in my grade. After my freshman year, we moved to a new school that provided Jane with a much more positive environment where her anxiety and depression issues eventually went away.

Those high school years impacted me the most because I learned how to be patient and how to accept responsibility for others, even at a young age. Others who have siblings with special needs should know that while there will be rough times and times where you will feel a heavier burden on you than on others your age, there will also be moments that will be so wonderful you won’t ever want them to end. Embrace your sibling as they are and love him or her like you would any other member of your family. That is when you will see the amazing qualities and capabilities these people have.

*not her actual name

Cancer: A Word Full of Hope