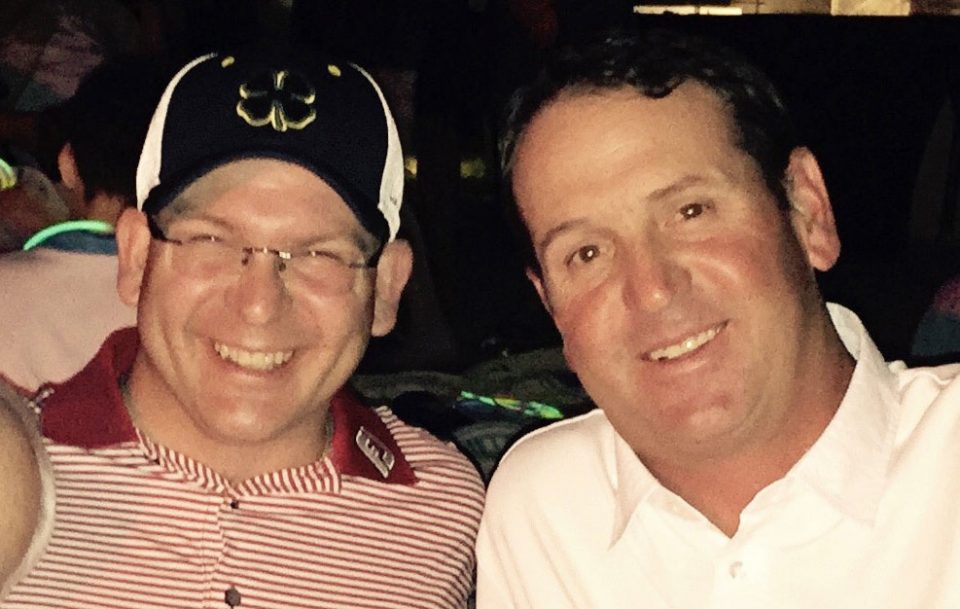 Kevin Frazar was born in 1975 when his older brother Harrison was just four years old. During the delivery, the doctors knew something was wrong with Kevin, but they didn’t know exactly what. They told his parents that Kevin had suffered a stroke in the womb that had affected his brain development; the umbilical cord had wrapped around his neck during the delivery, and the doctors warned his parents that he might not make it. The family prepared for Kevin’s death, but he defied the odds. Weeks later, when they brought him home, Harrison’s parents told him that Kevin was “special” and that he had to treat him accordingly. All Harrison knew was that this was his little brother; he was too young to understand.

When Kevin was one-and-a-half years old and had not yet achieved the benchmarks that other children typically do, the doctors confirmed that he had cerebral palsy. One side of his body was smaller than the other and that side turned inward; Kevin was also emotionally and intellectually lagging behind other children. Even with the diagnosis of cerebral palsy, the Frazars made the decision to raise him at home and as normally as possible. “My parents were not going to let the cerebral palsy define us or get us down,” says Harrison. They turned to Children’s Hospital, Easter Seals, and other medical facilities for surgery on Kevin’s turned-in eye and for therapy. He was fitted with corrective braces to correct his turned-in foot, and he received occupational and physical therapy to teach him to crawl, walk, and do other things most people take for granted.

As Kevin grew older, he was able to walk and speak more adeptly, and in second grade, he was enrolled in a public school special education program. After a move took them away from Dallas for a time, the family moved back to the Highland Park area in 1985, and Kevin had access to the school district’s excellent special education program. He was a student there through high school, and he made a small group of friends who watched out for him. He became the equipment manager for the high school football team, and the entire community there embraced him. “He still speaks very fondly of those boys and still remembers them,” says Harrison.

Meanwhile, Harrison was growing up in the same household and says that he never felt different being the sibling of a child with special needs. “I never felt slighted, nor that I was denied anything,” he notes. “We had a simple, structured life, but I didn’t know any different.” Harrison adds that it was a wonderful childhood. He wasn’t allowed to have normal sibling rivalry, and he was coached by his parents that he and Kevin weren’t going to fight. “I didn’t fight and I was very sympathetic,” says Harrison.

One of the by-products of having a special needs brother was that on weekends, in order to relieve his mother from the duties of taking care of two children at once, Harrison often spent time with his father. There was baseball, football, and other outdoor activities, including golf. Harrison played golf with his dad and other adults when he was just seven years old.

As a teen, Harrison and Kevin maintained a very close relationship. Harrison participated in many sports, and Kevin was always there to cheer him on. During college at the University of Texas, where he played golf for the Longhorns, Harrison came home every few weeks to visit, and Kevin displayed his pride for his big brother and his achievements. “When I was an All-American in golf, Kevin must have told everyone in town for about two weeks,” beamed Harrison. “He was the proudest and most supportive brother you can imagine.”

After high school, Kevin attended a special education college program in Albuquerque, NM for about a year. When he returned to Dallas, he went to work at local golf courses. About eight years ago, his parents encouraged him to try to live on his own. Today, Kevin lives in his own condo in downtown Dallas and has a job at a large law firm in their program for those with special needs. He rides the bus to and from work, and he occasionally enjoys some live music at a club or takes in a Dallas Mavericks game. Although he is somewhat independent, his parents, Cookie and Dick Frazar, along with Harrison, his wife Allison, and their three boys, Harrison, Ford, and Slayden, are ever present. “It’s taken a lot of effort, sweat and tears to provide Kevin a life that’s as close to normal as possible,” says Harrison. “I give all the credit to my parents.”

Harrison describes Kevin as a very social person who loves to be around people and enjoys music, concerts, sporting events and going out to golf outings. He especially enjoys spending time with Harrison’s three young sons. “Kevin is a blessing,” says Harrison.

About 12 years ago, after watching Harrison hit the links for so many years, Kevin told his father that he wanted to play golf. His father was a bit hesitant, given Kevin’s physical unsteadiness. Once again, like he did so many years ago, Kevin defied the odds. He smacked the ball 200 yards with a driver off the tee, and big brother Harrison couldn’t be prouder.

Throughout his career, an unfortunate number of injuries has caused  him to take substantial time off with medical exemptions. Despite coming off a shortened 2010 season because of surgery to his right shoulder and left hip, Frazar found a second wind.

He made the cut at the Byron Nelson Championship and tied for 14th . Then, in 2011, after 14 years and 354 tournaments, Harrison Frazar won his first PGA Tournament at the FedEx St. Jude Classic in Memphis, Tennessee in a harrowing playoff with Robert Karlsson.  One of the highlights of his professional golf career was receiving a coveted invitation to the Masters.  Another highlight was receiving the hand-made trophy his young sons surprised him with in 2008 when he became one of the few golfers in history to shoot a 59 at a PGA Tour qualifying event, winning the tournament handily. 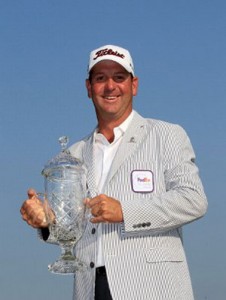 He is currently on an extended medical hiatus and enjoying spending time with his family.