Honest. Genuine. Real. It’s clearly how Chef Tim Byres rolls—both in and out of the kitchen. It’s also what led him to open Oak Cliff-based Smoke in 2009 to rave reviews. While the restaurant is centered on smoked ingredients, it’s definitely not a barbecue joint. Nor is it what Byres might call “your father’s steakhouse.” Instead, it’s the perfect combination of traditional barbecue and farm-to-table cuisine; rustic meets refined. We’re talking all natural, pulled whole hog on the very same menu with foie gras and chicken liver pate with smoked red onion marmalade. So, how did Byres know that Smoke would be such a hit? “Dallas has its own food personality, different from Austin or Houston,” Byres says. “I felt that we were ready for a fresh dining concept—less formal and more focused on seasonal ingredients but still uniquely Texan.” And with the opening of Smoke Plano earlier this year, suburbia is finally getting a taste of Byres’ notable talents.

Byres, a 2014 winner of the prestigious James Beard cookbook award for Smoke: New Firewood Cooking, says that when considering a second location, he was specifically interested in Plano. Aside from the fact that he lives in the area, “There’s so much opportunity here. We have a lot of restaurants but most of them are chains. I think local residents are looking for more diversity, more independent places,” he says. The newest location at Park and Preston with its large, covered patios and nearby, like-minded businesses such as Trader Joe’s and REI give it a real neighborhood vibe. 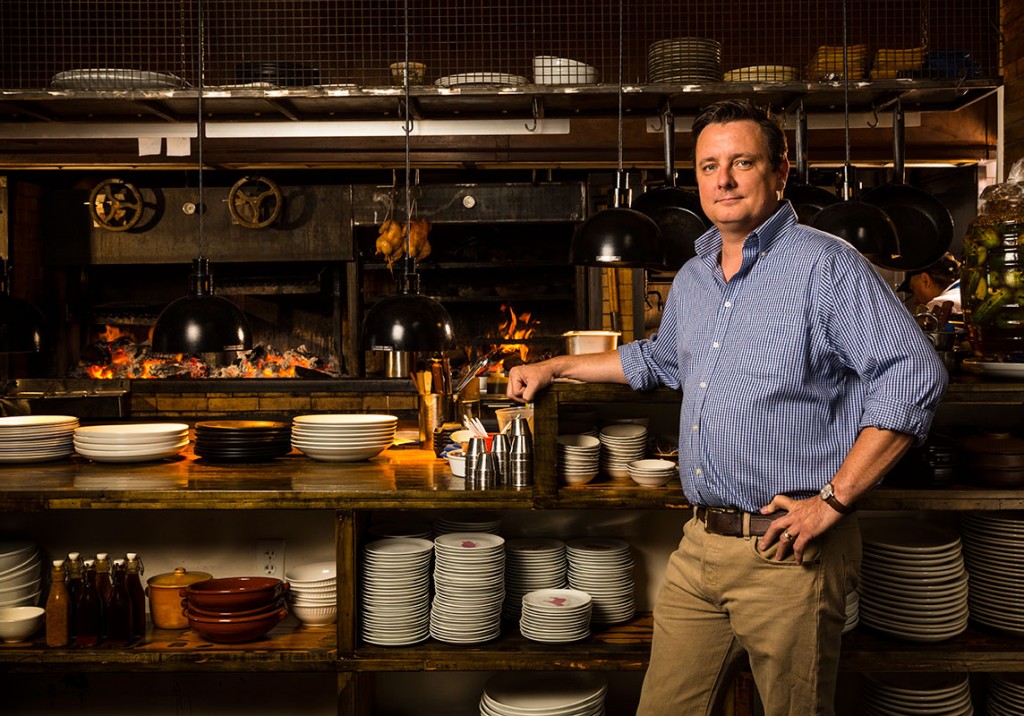 “I wanted Smoke Plano to be the kind of place where you could bring the kids on a Saturday morning for a big pancake brunch, hang out with friends for wine and cheese on a Tuesday, then come back the following weekend for date night,” Byres says. While it shares a name and several menu items with the Dallas location, Smoke Plano is its own place—sort of a warm, cozy extension of your grandmother’s living room—if she happened to be a hip artist from Marfa. And lived in a quirky loft. The patios in particular have already become a local favorite for the happy hour crowd, and the large dining room is perfect for family or corporate gatherings.

Without a doubt, the restaurant’s crown jewel is its ten-foot charcoal hearth grill. This is where Byres and fellow chefs work their culinary magic on everything from meats and fish to vegetables such as local beets (be sure to try their roasted potatoes with tomatillo butter). Other favorites include house made biscuits, pimento cheese croquettes and the EB&D Loaded Up & Truckin’ Burger. If you really want to splurge, the cheese grits and hominy casserole is to die for. Thanks to Byre’s influence, the whole place is underscored with the type of big, southern hospitality for which Dallas is particularly famous. He calls it, “Come on in and let me show you around.”

Whether you’re looking for place that offers a light, healthy bite, a craft cocktail or some good old-fashioned comfort food, Smoke Plano’s got you covered.

What Makes SMOKE Plano so HOT?

• Both patios (one large, one smaller) can be rented out and both have bars. Tons of carnival lighting provides a fun and festive atmosphere.

• The big, private party room with access to the patio is just right for all of your upcoming celebrations.

• It’s not just meat! (although the meat is fantastic)